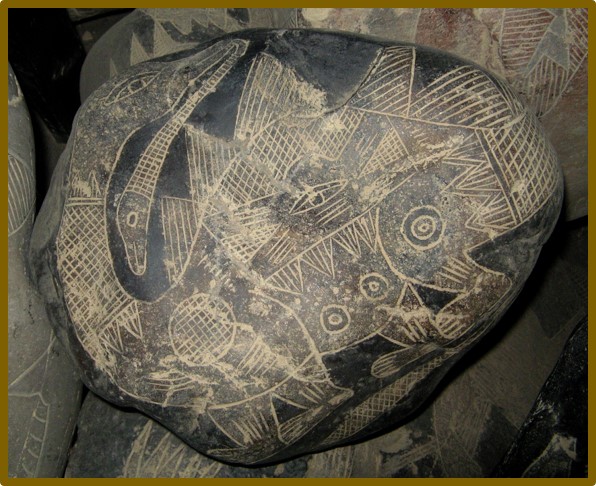 Thousands of Peruvian dinosaur stone carvings were found in the vicinity of the village of Ocucaje and Ica, in Peru. The collection of rounded stones totaling perhaps 16,000 with each stone weighing between five to eight pounds were amassed by Dr. Javier Cabrera, of Lima. As the head of archeology at the University of Lima, he devoted much of his life to collecting and studying these stones which depicted many different dinosaur species with stunning accuracy. These, like many other astonishing artifacts, hundreds of years before the invention of paleontology, indicate mankind’s knowledge and familiarity with dinosaurs. Dinosaurs which evolution popularizers assure us were millions of years extinct despite such accurate depictions.

Some sources have pointed out that some stones are fakes or hoaxes. While there clearly modern stone carvings sold by Peruvian even through modern day, which are sold at flea markets as souvenirs these are not “fakes” but they simply are modern handmade sculptures. Any fakes intended to pass as original ancient stones did not surface until many years after the original discoveries of Dr. Javier.  These sort of fakes are better described as forgeries. These forgeries were created likely as means to cash in on the excitement of the ancient stones or perhaps for another reason.

Regardless of the reason for such forgeries, they do not negate the empirical evidence supplied by the majority of the documented specimens categorized by Dr. Javier. In the recent decades many stones have been carefully examined scientifically and have been determined to be authentic.

Scientists continue to debate and validate these specimens stone by stone and the mystery of these carvings remains alive. The clear question is: How could humans depict dinosaurs so accurately without being eyewitnesses of these mighty reptiles? Such stones remain a serious threat to evolution and are therefore scornfully discredited and belittled.

Lets be real, even if one stone could be fully validated beyond debate, would evidence cause any naturalists to change their minds about dinosaurs being millions of years old? Unlikely.

The so-called "God in the Gaps logical fallacy" is debunked because Creationists do not merely attribute God's cause, order, design, and purpose to those things currently not "yet" fully understood by science: Creationists...