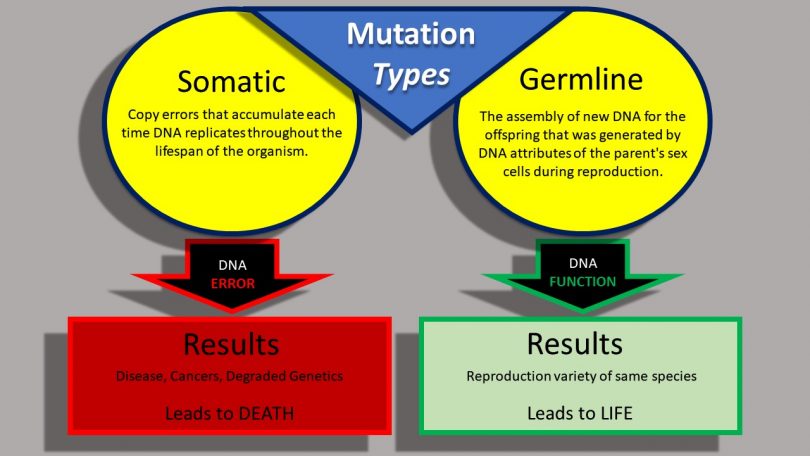 Mutation is a word, as it turns out, to be used very liberally in genetics. The word is used to describe the awesome predictable and faithful function of DNA at reproduction. The function that drives the beauty and diversity within all living organisms. Ironically, mutation is also used to define spontaneous mistakes, errors, and deletions of genetic materials which when detected are almost always detrimental and degradative. The story of evolution is best told with the backdrop of a clumsy and blind spontaneous and random mechanism that is forming all of life, but frustratingly for evolution popularizers, this is not what genetics has revealed. DNA intended function is wildly different from spontaneous mutations. Such data does not play well with the story of Darwinian evolution so it is always downplayed.

Mutation: It is vitally important to realize that evolutionists are very fond of the word “mutation” because Neo-Darwinism relies on it being the mechanism for evolution to occur and it invokes an image of naturalistic and random mistakes building living things.

Today science uses the biological term “mutation” to describe two wildly different phenomena: (1) Changes at reproduction as a function of heredity as performed by preexisting DNA alleles frequencies or germline mutations, and (2) Genetic errors or somatic mutations are copy errors in DNA genetic material which are mostly bad. They account for much suffering, including approximately 2/3 of all cancers known in humans.1 Somatic mutation is not a mechanism providing any beneficial “modifications” for any living organism.

New cells are formed when an existing cell divides and copies its DNA, one cell turning into two. Every time DNA is copied, about three random (“somatic”) mutations occur.” Vogelstein said.

However, sometimes the errors hit the wrong spot and damage genes that can spur cancerous growth or damage the genes used by DNA to spot and fix problems. Then, when these damaged cells are replicated, important mutations gradually build up over time. That’s one reason the risk of cancer increases with age.1

This “mutation” has nothing to do with copy errors like somatic mutations. These germline mutations refer to a hereditary function, which involves forming new DNA within the zygote in human beings at reproduction. This is where the unique characteristics of the offspring are woven together from the parent’s sex cells to form an all-new life form from brand new DNA. This operates within DNA function called allele frequencies– frequencies mean the areas where modifications are permitted to the offspring, such as eye, hair, or skin coloration.

Germline function provides hereditary modifications that are allowed, caused, and limited by DNA (allele) function which occur only at reproduction. It is this DNA’s function that is used as the mechanism which causes diversity of offspring only within the same species.2

This mutation type involves copy errors which occur each time every strand of DNA replicates over the entire lifespan of the living organism. DNA catches and corrects many of these errors, but many still accumulate over time. Harmful environmental conditions can exasperate these mutations under such conditions as cigarette smoking or excessive exposure to the sun. Such somatic mutations are examples of damage at the DNA level.

Most cancers are caused by metabolic processes called somatic mutations.

John Hopkins University has identified that somatic mutational errors cause cancer. Cristian Tomasetti, assistant professor of biostatistics stated that these copying mistakes are a “potent source of cancer mutations” and “2/3 of all cancers in humans are caused by these mistakes.”1

Why are these referred to using the same word: mutation?
To consider the beneficial DNA hereditary function at reproduction (“Germline”) vs. the detrimental mutational error of somatic mutation, to use the same word to define both functions is absurd. We believe the primary interchangeable use of “mutation” is intentionally designed to be deceptive. By doing so, naturalism (evolution) artificially gains credibility by claiming even known DNA function as also belonging to a mutation that is spontaneous, random, and a mistake of nature. Thereby moving the invisible hand of evolution with such apparent deceit.

Scientists continue this despite fully knowing that the heredity function of DNA alleles is preexisting and not due to spontaneous, random errors. All while science knows that somatic mutations are detrimental, destructive, and in many cases, deadly errors.1 DNA function and mutations are two completely different phenomena within the field of biology, yet they often are interchangeably given the same name: mutation.

Natural Selection and Mutation “bait and switch.”
Lastly, while modern biology distracts us by calling both functions of DNA mutation, despite the obvious and factually distinctly differing functions of these so-called mutations, here is where the bait and switch happens! Evolution appeals to the obvious and positive effects of DNA alleles at reproduction and proclaims that these ‘mutations’ (mixing in both types for good measure) are Darwin’s Natural Selection, both observable and a scientific fact! This may be true for ‘germline mutations’ (DNA at reproduction), in which we agree offspring are indeed diversified at reproduction within their same species: such effects are both good and observable. We might even agree that this does seem to “add up those things which are good” in any given species of life.

However, we must point out, that somatic mutations (which occurs outside of reproduction) fails to move (evolve) anything forward. These somatic mutations fail to “reject that which is bad” because they are in fact themselves what is “bad”. They conclude as cancers, sickness, disease, and death.1

DNA, as it replicates, is constantly working NOT to “evolve” because it avoids mistakes using sophisticated self-monitoring, self-editing, self-correcting, and self-replicating processes and enzymatic mechanisms. DNA works always to make identical copies of itself without any mutational errors.3 However, these mutational errors do accumulate over the generations (called “genetic entropy”). This is observable; each generation gains thousands more mutations than the prior generation.4

DNA function drives the diversity and (by function) obstructs evolution. DNA can be considered an analogy for an informational blueprint (instructions), written in code like computer programming, used by the cell to assemble every component of all living organisms on earth.

We find “Natural Selection” (variety within the same species) limited by the preexisting DNA (allele) function at reproduction or as heredity. We find errors because mutations outside of DNA function cannot be passed to offspring 2 and are mostly detrimental to life.1 Such somatic mutations fail therefore to “reject that which is bad” because they are not hereditary. Such a failure can be clearly expressed when a person dies of cancer.

We find factually that DNA functions (so-called germline mutations) work to maintain and generate variety and diversity within the same species while constantly limiting, correcting, and trying to stop all mutational errors.3 Therefore, in conclusion, we find germline function as an explanation for “Natural Selection,” but this is where it ends. We have the means to produce more variety within the same species– macroevolution’s mechanism does not exist in genetics.

4 “Genetic entropy and simple organisms, If genetic entropy is true, why do bacteria still exist?” by Robert Carter; October 2012 https://creation.com/genetic-entropy-and-simple-organisms