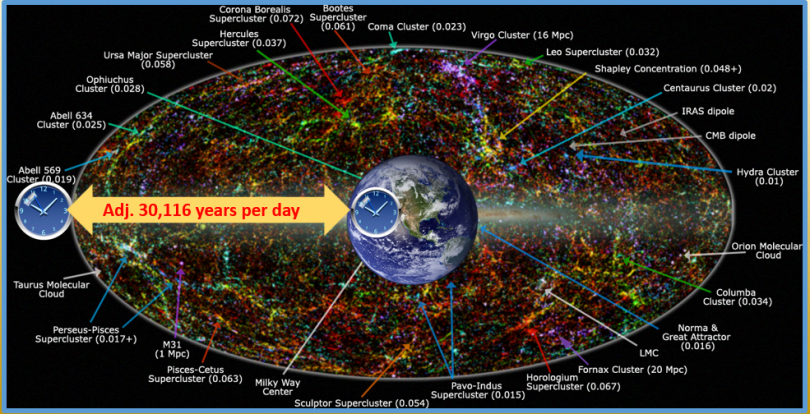 Time dilation finds that time moves at different rates depending on where the observer is located. Such evidence reveals that time and space distance are not dependent on each other. Such a reality gives room for a massively large universe (billions of light years in width) not requiring billions of years to have formed.

(Albert Einstein’s) Time dilation isn’t just theoretical; global-positioning satellites have to take it into effect to provide accurate readings to users here on Earth. And scientists have measured the phenomenon precisely in the field, most famously in 1976 with the Gravity Probe-A experiment. Back then, researchers launched an atomic clock to an altitude of about 6,200 miles (10,000 kilometers), then compared its ticking to that of a similar instrument here on Earth. The results confirmed the predictions of general relativity, to within 0.007 percent.”

Using the example of the adjustments made to the atomic clocks on earth (Greenwich and Boulder, Colorado) each year we can apply the math to distant starlight from the edge of the observable universe.  Using the same math, we apply these same adjustments and find an observer difference of 3.88 hours per day or 5,098,320 seconds per year.  (We keep this in seconds because the speed of light travels in miles per second).  The Speed of light travels at 186,282 miles per second.

Therefore, the observable time adjustment based on Einstein’s time dilation formula as applied from earth to the edge of the observable universe separates an astounding 9.49 X 1011 miles per year!   This is an addition to the rate of time as it actually passes on earth– from our observational point.  There are many problems with this theory as an example, the universe is perhaps expanding at increasing rates.  However, this conjecture (opinion) indicates that the ages affixed to the distant starlight of the universe which naturalists theorize as 13.8 billion years ‘space/time’ actually indicate a much younger universe.

Another way of stating this is the clocks between the edge of the universe and earth (assuming a biblical timeframe of approximately six thousand years) requires a time dilation adjustment of 180 million years!

While it is not surprising that these calculations don’t fall into biblical (or naturalistic) time frames (because the creation event was a miraculous and did not happen by naturalistic events) these adjustments do bring serious questions to the billions of years assumed by evolutionary timelines and indicate the universe may be young enough to meet biblical time frames.