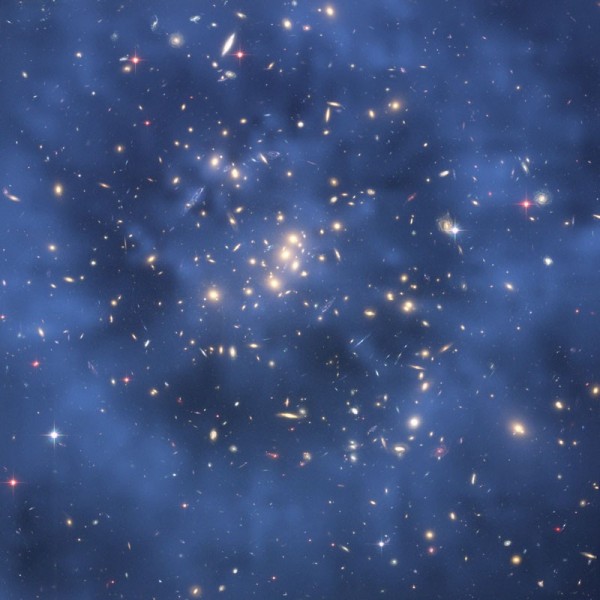 We can’t find any trace of cosmic dark matter – perhaps because our models of the early universe are missing a crucial piece, says astrophysicist Dan Hooper in article from NewScientist.

Effects of how stars move within galaxies and galaxy clusters provide some evidence as to how stars move. However these observations fail to explain how such collections of stars came about in the first place or why they continue to “hang out together today”.1 (emphasis mine)

What is holding together the universe together as we observe it? “What it is, we don’t know.”

The single largest mystery confronting cosmology today is Dark Matter.1 The lack of understanding of Dark Matter directly challenges the models of the formation of the universe such as the Big Bang. Even multitudes of experiments involving particle-smashing conducted at the Large Hadron Collider have still “seen nothing”.1 That is forcing us to radically revisit assumptions not only about the nature of dark matter, but also about the early history of our universe.

We hoped (we) would create dark matter, (but) haven’t – at least as far as we can tell. The hunt for dark matter was never supposed to be easy. But we didn’t expect it to be this hard.”

There is as yet no consensus (written in 2011 still in 2019) on these questions, but time and more data should provide answers.”

Flatly: Science (still) does not know what Dark Matter is.

Dark matter and dark energy comprise approximately 95% of the universe leaving only about 5% for all the stuff we can observe.”

The failure to detect the particles that make up dark matter suggests that the beginning of the universe may have been very different from what we imagined.

The simple Big Bang theory is not without potential problems, and some aspects require further investigation and explanation. One such problem is the rather unfortunate fact that about 85-85% of the matter which is predicted to exist in the universe (is) invisible or otherwise unaccounted for!”

The Physics of the Universe https://www.physicsoftheuniverse.com/topics_bigbang_darkmatter.html