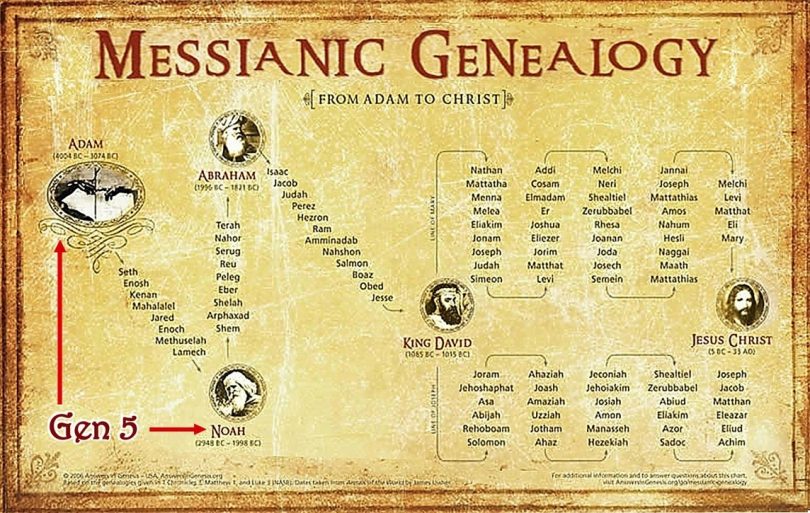 Biblical scholars have summed up the lifespans of the biblical patriarchs from Adam (created on day 6 of creation) to Jesus (about 2000 years ago) to calculate a universe and earth that is only about 6,000 years young.

A straightforward reading of the biblical genealogies from the (reliable) Masoretic Text shows that Adam was created about 4000 BC and that the Flood occurred around 2500 BC. Contextual, linguistic and historical analyses of the book of Genesis confirm that the chronogenealogies are a complete record with no gaps. Creationists who wish to push back the date of the Flood and Creation to fit their geological or archaeological theories have no grounds to do this based on the biblical record. They should rather look to their scientific theories to see where the discrepancies lie.”

By adding together the birth and death years of the biblical patriarchs many scholars have devised timelines similar to the one shown above. The chart takes dates backward from The Flood as we know that the live of Methuselah was completed before the flood came.

It is unknown if God sent The Flood at the moment after Methuselah’s death or perhaps later that year, but such adjustments to the time line are insignificant. The time line shown ends at the death of Jacob which has been calculated as being approximately 1853 years before the birth of Jesus (or 1853 B.C.) or the birth of Jesus was 4108 years after from creation. Jesus’ birth until today are counting each year (current year 2019) or approximately 6,128 (+/-) years since creation.

Note: The birth of Jesus was on 1 A.D. (A.D. means the year of The Lord), so Jesus was born on 1 A.D. and on His first birthday would have been 2 A.D. Therefore, there never was a “0” (zero) A.D. so this is a one year subtraction. Some genealogical pathway and scriptural calculations have resulted in minor differences over the centuries this has been studied. As an example, scholars still debate today as to whether Jesus was crucified as early as 30 A.D. or perhaps as late as 36 A.D. Less sophisticated debates have other dates that are unreliable. Today, many bible scholars agree that 33 A.D. would be the most likely year Jesus was crucified based on scriptures, calendars (feasts & holidays), and astrological phenomena.

Virtually all scholars believe, for various reasons, that Jesus was crucified in the spring of either A.D. 30 or A.D. 33, with the majority opting for the former. Astronomy narrows the possibilities to A.D. 27, 30, 33, or 34).

To be clear, the Bible does not explicitly specify the precise date of Jesus’s crucifixion and knowing such a date is NOT an essential salvation truth. However, this does not make the debate unknowable or unimportant.

What about the creation of angels?

Regarding the creation of the angels (including Lucifer and the fallen angels): can be resolved when one considers the clear biblical teachings including Exodus 20:11.  “For in six days the Lord made the heavens and the earth, the sea, and all that is in them, but he rested on the seventh day. Therefore the Lord blessed the Sabbath day and made it holy.”  This makes it clear that everything, heaven, earth and all their inhabitants, i.e. everything that was made, was made in those six days.  Many believe this may have occurred in the first day but the bible doesn’t clarify. Regardless, after Creation week, God proclaimed that everything He had made was all “very good”.  That means that the angels were created in those six days (probably at the beginning of Day 1, as they rejoiced when later that day the foundations of the earth were laid, as Job 38:4–7 indicates). It also means that Lucifer’s rebellion could not have happened yet. Since he tempted Eve after his rebellion, obviously, this must have happened after creation week but before the temptation of Eve.