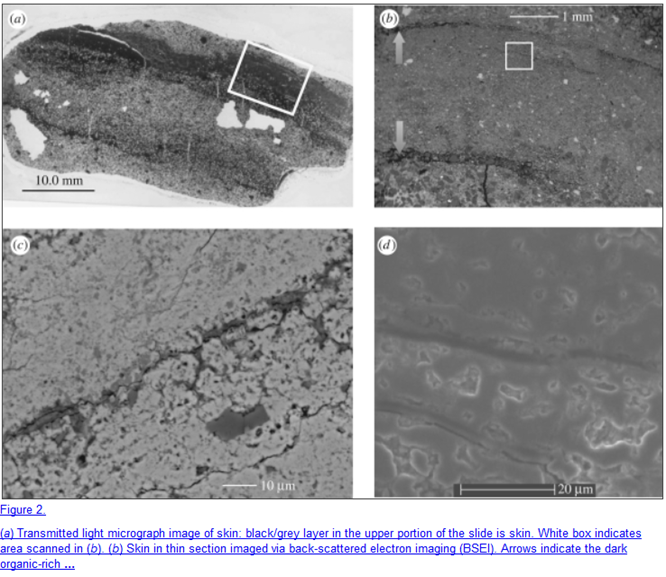 Amazing preservation of connective skin tissue discovered in dinosaur fossils has raised serious doubts as to how old these samples might be. Such structures decay rapidly and even proposing that they are ten thousand years old is a stretch, let alone 75 million years old.

The skin of extant vertebrates is commonly composed of two different tissues that are closely apposed to each other: a surface epidermis (constructed from multiple layers of epithelial cells) and an underlying dermis composed of dense connective tissue. Skin-like structures observed suggest that the epidermis has been partially preserved in the area sectioned. Cell-like structures observed support the potential presence of an epidermal layer comparable to extant vertebrates.

Chemical mapping and amino acid analyses indicate that the composition of the preserved specimen differs from that of the surrounding sediment and maintains structures strongly reminiscent of soft tissue.

Rapid burial, combined with a depleted oxygen environment, contributed significant bicarbonate to the system. Intensely reducing porewaters, generated by the decay of plant material, caused oxidized iron species to be reduced and feldspar and rock fragments to partially dissolve. The reduced iron in solution rapidly replaced the soft tissue with carbonate minerals with dissolved silica lining the canals of the tendon. Mineralization apparently outpaced microbial decay processes, thus ensuring high-fidelity preservation of some integument structures. This rapid mineralization also ensured that some breakdown products of organic molecules at the point of burial…as preserved within the mineral matrix.”