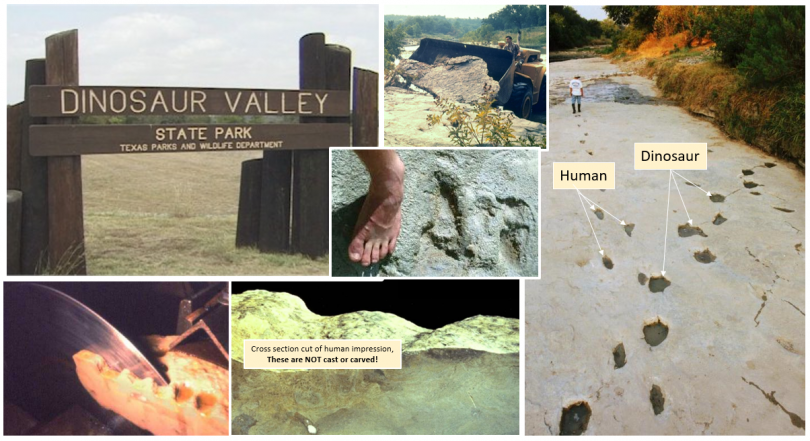 Dinosaur and human tracks have been discovered together in supposed 110-million-year-old Cretaceous rock layers in the river bedrock of the Paluxy River near Glen Rose, Texas. The evidence is highly controversial primarily due to the clear death sentence such evidence would render for the millions of years required for evolution to ever have occurred.

The claim of forgery has been debunked by cross-sectioning impressions under magnification. A fake would be easily detected as any would indicate tampering or carving. Here, randomly cut cross sections of the internal rock structures show the patina, erosion, and contours of the impression. These structures conform to the shape of both the heel and the great toe impression of human impressions demonstrating that this is an authentic human impression in Jurassic limestone along side known dinosaur footprints. Dinosaur and human tracks have been discovered together in the (supposed) 110 million year old Cretaceous river bedrock of the Paluxy River near Glen Rose, Texas. When evolutionary philosophers criticized this historic discovery claiming someone must have forged these human tracks evolutionists were invited & eye witnessed the uncovering of more evidence.