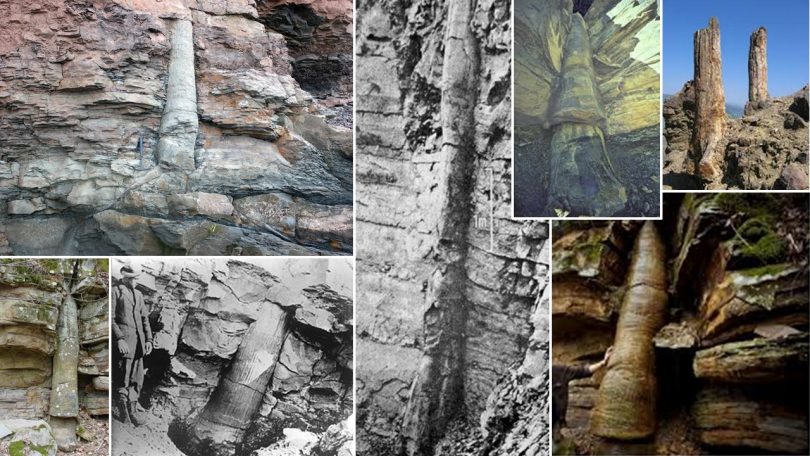 Polystrate trees or more straightforwardly described as fossilized trees standing upright through many rock layers supposed as eons of time. Such evidence indicates rapid burial of the tree in mud slides and molten rock layers over a very short period of time and destroys the idea that the rock layers represent many of millions of years of time.

Polystrate trees (upright fossilized trunks pushing through many rock layers) are also called polystrate fossils. These specimens indicate rapid burial of the tree in mud slides and molten rock layers over a very short period of time and not over millions of years. These upright tree trunks are found all around the world. Some are found in rock layers while others are found in coal seams in The King Billy pines, Celery Top pines, and in southern hemisphere coal. There are also polystrate tree trunks in the Yellowstone fossilized forests and in Nova Scotia and many other places throughout the world. Polystrate fossilized trunks occur in northern hemisphere coal, indicating rapid burial.

The evolutionary, uniformitarian explanation for petrified forests (with polystrate tree speciments) find the lowest level of trees represents the most ‘ancient’ soil level and forest, and each level above represents another forest (less ‘ancient’). The layers consist of mature trees (in some areas) trees have up to 1,000 growth rings.  In the first forest, the trees were growing in their natural habitat, when they were covered with volcanic ash and other debris.  Over time, the trees petrified, and the surface ash turned to volcanic clay, and to a soil layer. Another forest of trees grew up, matured, and was also buried by volcanic ash.

Evidence from the Mount St. Helens erruption clearly indicates that all the layers (thought to being ‘ancient’) could form over perhaps a decade or two as water saturates the logs and peirces them into the soft soils at the bottom of bodies of water.  After the water dries, over perhaps hundreds or thousands of years, the logs petrify and become the petrified forests we find around the world.