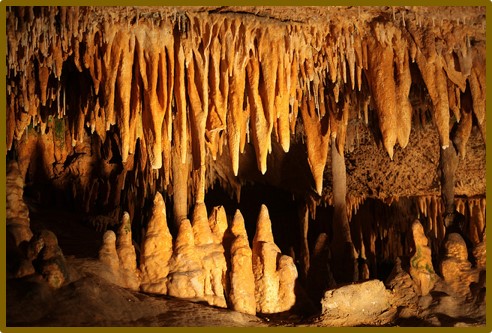 Stalactites and stalagmites don’t take thousands or millions of years to form. Documented photographic evidence has shown that a stalagmite shawl developed in a mining tunnel in less than 150 years covering a sign in the mine. Rates of water seepage through the minerals dictate the rate of growth of these formations. An extremely slow gradual rate as measured today does not validate that this rate has remained constant into the distant past. Faster water flow can equate to faster stalactite and stalagmite formations.

Photographic evidence has shown that a stalagmite shawl developed in a mining tunnel in less than 150 years. Other long stalactites and fair-sized stalagmites in a disused mining shaft have also been observed. There are also a host of stalactites growing under the Australian War Memorial; or perhaps even the Western Australian waterwheel which was frozen in limestone after only 65 years. The fact remains differing flows of materials can impact growth rates. It is only logical that when most are observed under current rates they can be backward calculated as very old but different natural conditions could have been much different in the past—such as a global flood cutting many of the underground caves where these structures are found in the first place.

Fast-growing stalagmites and stalactites are created by minerals running through the rock layers above and dripping or running into the cave.  Because the rate of flow of these waters may have varied over thousands of years the rate observed today has nothing to do with the rates of the flow when forming.