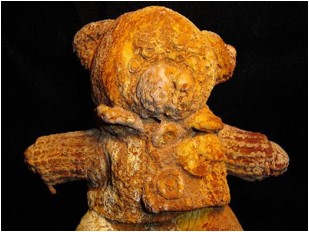 That’s right! Under the right condition’s fossilization can occur very rapidly. Many materials rapidly permineralized or turn into a fossil: including a teddy bear. At a Northern Yorkshire river named Nidd, a waterfall, naturally rich in calcium carbonate, is used to turn teddy bears into stone…and into profit. The practice of turning various cloth and non-cloth items into stone has gone on for centuries. The idea that fossilization takes many thousands of years is non-scientific because it is not observed as occurring in the present. Therefore, the idea that fossils are ancient are an assumption.

What’s amazing, however, is the speed at which petrification occurred. Rather than centuries, small toys like teddy bears can petrify in just three to five months.

The waterfall in Yorkshire turns Teddy Bears into stone after about three to five months. It has been determined that also nearby stalactites and stalagmites fill caves and run off of waters containing calcium carbonate and turns them into stone.1

The earliest reference to this water source and area goes back to 1538.2 Many visitors believed the waters had special healing powers while others claimed it to be cursed by the devil. In 1630, the well was sold by King Charles to a man named Charles Slingsby who began guided tours.2