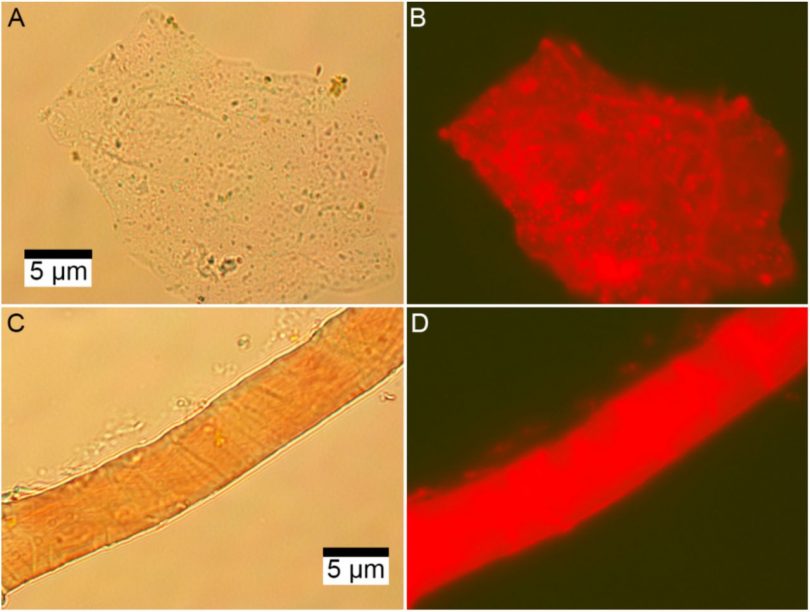 When the term “soft tissues” are used they are intended to describe flesh or more specifically, molecular structures of living organisms comprised of proteins. Such proteins decay at known rates and are therefore only detectible for thousands of years. So, when they are found in fossils assumed as being millions of years old then a dilemma emerges: One variable is wrong either the decay rate of proteins or the age of the dinosaur fossil. (Hint: it is the assumption of the age of the fossils and not the known and observable rate of decay in proteins.).

Given the fact that fossils have been laying around for million years, no one expected them to contain soft tissue. Indeed, laboratory studies seem to indicate that soft tissue decays in a matter of 50 weeks or so.”

Maria McNamara and her colleagues were examining a salamander fossil that is supposed to be 18 million years old. They were shocked to find beautifully-preserved muscle tissue on the bone. They show that the characteristics of the soft tissue are all very similar to the characteristics of the muscle tissue of modern salamanders, and the few differences that do exist are probably the result of “initial, limited decay.” Here is a part of what they write in their abstract:
The muscle is preserved organically, in three dimensions, and with the highest fidelity of morphological preservation yet documented from the fossil record…Slight differences between the fossil tissues and their counterparts in extant amphibians reflect limited degradation during fossilization…

Our results provide unequivocal evidence that high-fidelity organic preservation of extremely labile tissues is not only feasible, but likely to be common.

In fact, the truly remarkable thing about this find is that the soft tissue was not even inside the bone. In Schweitzer’s finds, the soft tissue was found encased in bone, which at least would provide some level of protection from all the chemical and biological agents that work to degrade soft tissue.

However, this beautifully-preserved soft tissue was sitting on top of the bone, exposed to the sediment.

In conclusion, processes within chemistry and physics limit duration’s of decay in observable materials such as muscle, collagen, blood vessels, and red blood cells. We are left with two different possibilities. First option is there is amazing preservation for millions of years of which preservation of such materials even under the most optimum controlled conditions such as freezing or refrigeration still would not be expected to preserve anything for more than perhaps a decade or two. Or the second option, which is the most obvious, is the dating method is completely wrong. These samples simply are not millions of years old, not even one million years old, but are thousands of years old and preservation is still amazing!