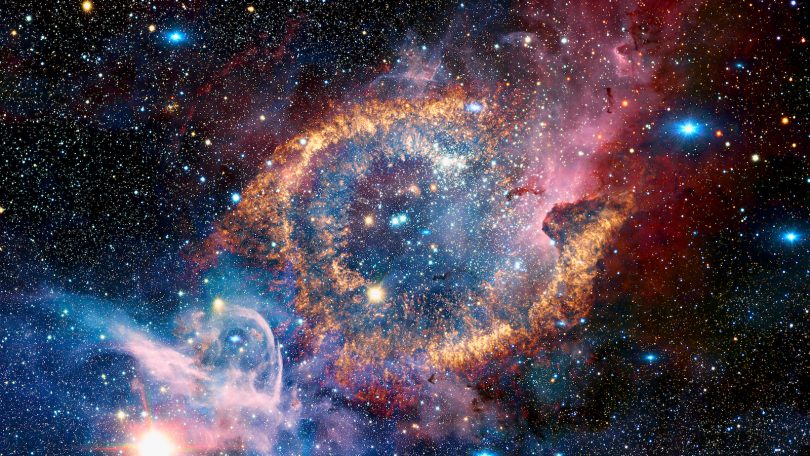 The puzzle of the origin of the universe keeps cosmologists and physicists busy writing opinions and theories, but they all note that problems are massive. A new formula identified that the universe is ten times heavier then it “should be”. One solution has been dark matter but such material has remained illusive.

Computer modeling has shown that even with 13.7 billion years (which is assumed by naturalists to have elapsed), is still “nowhere near long enough for the huge structures of today’s universe to have developed, by the gradual process of gravity and increasing density…(t)his could have only happened if there was, and/or is, much more matter in the universe than our current estimates (10 times more) of the matter tied up (within) visible stars.”1

Thus the search for dark matter– but the “problem” remains: even if dark matter is found, the universe is too heavy (too much density) and therefore breaks the math of the Big Bang.

The stars in spiral galaxies like our own Milky Way whirl about the galactic center, prevented from flying off into intergalactic space by gravity. However, calculations of the speed of the whirling, dating back to work by maverick astronomer Fritz Zwicky in the 1930s, suggest that the galaxy is actually spinning much faster than it theoretically should be in order to maintain its current equilibrium. Zwicky hypothesized that the only way this could occur was if galaxies, ours and all the others, actually contained much more matter (he estimated at least ten times as much) as is visible in stars, spread reasonably evenly throughout the galaxy.”

To complicate matters, gravity does not come close to explaining the spiral and spinning consistency of galaxies observed in the universe either. In the 1970s, Jim Peebles and Jerry Ostricker provided evidence that inner planets orbit much faster than those further out. The surprising discovery was that this was NOT the case with stars orbiting in a galaxy. Stars on the outer perimeter of the galaxy are orbiting just as fast as the the inner stars. Therefore, the force of gravity did NOT get weaker the further a star was from the center of the galaxy as do planets in a solar system. This “flew in the face of all that was known about gravity.”1

Therefore, The Big Bang theory needs many more billions of years, in a universe that is 10 times too dense, too expansive, and all of it is held together by a mathematics theory which breaks down because of these (and other) problems. Therefore, contrary to the confidence of textbooks and the internet, the origin of the universe is far from being “buttoned up”.

In reality, scientist do not understand what 95% of the universe consists of, how or why it appears as it does today, how it formed, forget about understanding its origin.