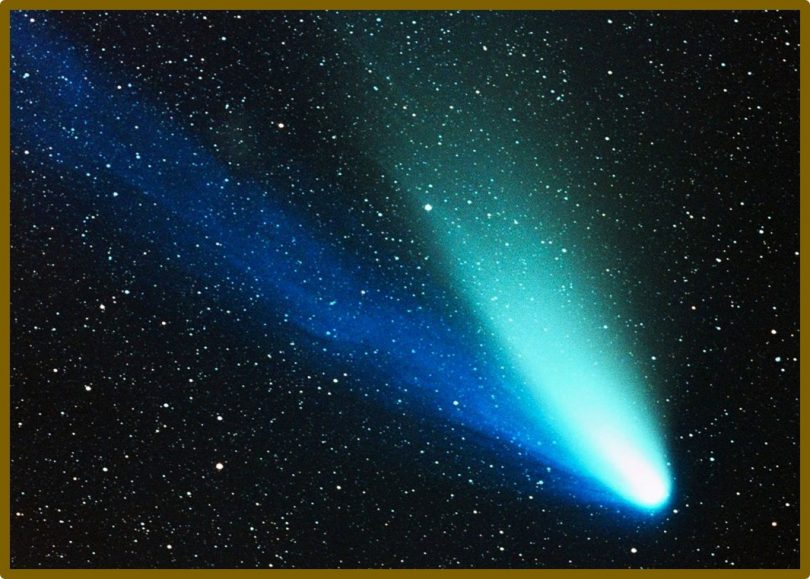 Comets burn millions of tons of ice and material each time they pass near the sun. If comets were billions of years old they would all be long gone. But they aren’t.

Comets spend most of their time far away from the heat of our sun in a deep freeze of space at absolute zero temperatures of -459.670 F. At zero kelvin atoms within molecules stop moving. But once the comet comes close to the sun, solar energy evaporates and dislodges masses or ice and dust streams to ultimately form the comet’s beautiful tail.1

Perhaps the most famous comet is Halley’s Comet which was last witnessed in earth’s sky in 1986. The comet passes the earth on average every 76 years. Halley’s size on its last passage of earth was approximately 9.3 X 5 miles. Scientists estimate that the comet loses about 3 to 10 feet of volume off its surface with each orbit of the sun and theorize that the meteor will eventually dissipate into dust.2 The comet is estimated to be completely gone after another approximately 2,300 orbits or 174,800 years.3

Such basic math shows the weakness of evolutionary time lines (of billions of years) and the direct conflict that exists by the very presence of comets. Comets don’t last even 1 million years! Therefore, the “save” claims that all comets seen today were originally rouge (floating randomly beyond our solar system) only to be later, like all comets we see today, by pure miraculous serendipity, was captured by our solar systems gravitational field. To add more fuel to this mathematical dumpster fire there are 6,619 known comets in our solar system today.4 Random chance of gathering rouge comets flies in the face of reason and common sense.

Therefore, comets have little mass compared to the many celestial objects we can observe in our solar system, and with each close pass to the sun the comet’s size is greatly reduced. With each passing of the sun a comets can burn off billions of tons of material. This orbit makes it impossible for the comet to have survived billions of years.

Of course evolutionists have a solution. They theorize an “Oort cloud” which is imagined to exist outside of the orbit of Pluto. This Oort cloud somehow re-generates material to the comets thus answering how these balls of ice and rock have survived all these billions of years. The Oort Cloud has never been observed nor is its existence scientifically. Obviously, the prevalence of comets in our solar system makes sense only in a much younger solar system.