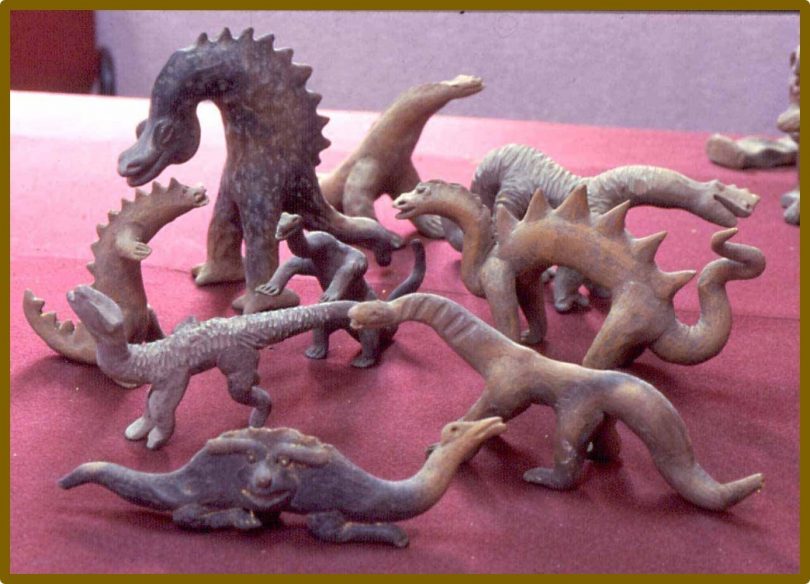 Dinosaur figurines dated as being approximately 3,000 years old clearly depict known dinosaur species including triceratops, stegosaurus, and even tyrannosaurus rex. Could these figurines be evidence of human encounters with dinosaurs? How could humans have known such detail of these animals that are supposed as being 65 million years extinct without being eyewitnesses?

Dinosaur figurines dated to being over 3,000 years old were found by German archeologist Waldenar Julsrud in 1925. He found these figurines at the foot of El Toro Mountain near Mexico City. These artifacts depicted several hundred different Dinosaurs including the Duck billed Trachodon, Gorgosaurus, Titanosaurus, Triceratops, Stegosaurus Paleococincus, Diplodicus, Podokosaurus, Struthiomimos, Plesiosaur, Maiasaura, Rhamphorynchus, Iguanodon, Brachiosaurus, Pteranodon, Dimetrodon, Ichtyornis, Tyrannosaurus Rex, Rhynococephalia and perhaps other yet to be identified Dinosaur species. Some specimens were over five feet long while the majority were under a foot in length. In all there were over 33,500 figurine artifacts found. How did these ancient cultures depict these dinosaurs which such accuracy thousands of years before paleontology was even imagined? http://thegreaterpicture.com/Waldemar_Julsrud.html