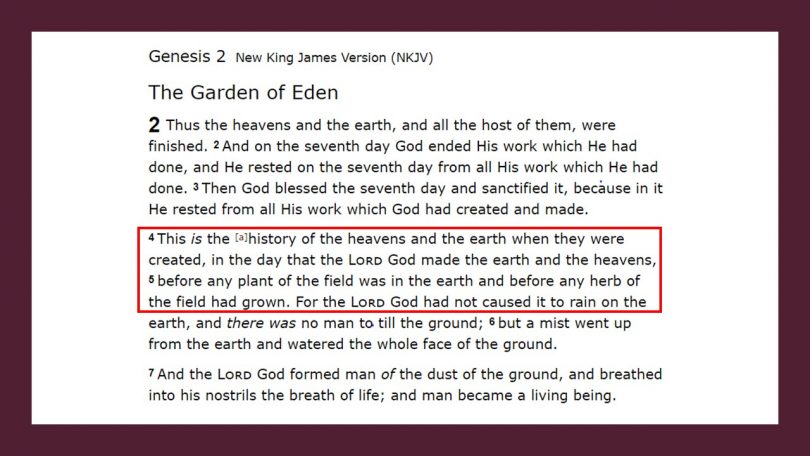 Bible scholars, public educated, atheists, and Christians alike often seek ways to interpret mainstream theories and worldviews into the biblical text.  Namely these groups seek to reconcile the creation account as recorded in the book of Genesis with the worldview generally called “The Big Bang Theory” (TBBT).   This mainstream worldview assumes both the universe and the earth as being billions and billions of years old.  Through various contrivances attempts are made to reconcile these discrepancies between the Bible and TBBT.  Why would any Christian attempt to fit the mainstream Theory into The Bible when doing so is in absolute disagreement with a simple reading of The Scriptures?

Perhaps this compromise generates acceptance and creates an image of being more scholarly (as this acceptance is in agreement with TBBT).  Clearly the idea of TBBT and billions of years are dogmatically taught by essentially the entire scientific community, the entire public educational system, universities, Hollywood, documentaries, History Channel, Nova, NASA, and textbooks around most of the world.  Therefore, from their viewpoint, opposing TBBT equates to clear ignorance because any thoughts contrary to their worldview are mere fairytales or mythology.

The idea is TBBT is scientific, while the biblical accounts are religious and specifically NOT science.  This is largely accepted as factual despite the obvious point that neither worldview is observable nor replicatable, both of which are demanded by the scientific process.  Therefore, both worldviews are NOT scientific but rather are theories based on organized belief systems or worldviews. Or more precisely, both are religions, one with a creation by naturalistic processes without a god, one with Creation by God.

Another problem with the compromise of TBBT is a primary tenant of The Theory itself.  In TBBT the universe was created first (when nothing exploded and expanded into everything approximately 15 billion years ago.1  Later, (through purely naturalistic processes called) the Nebular Hypothesis (an unobserved theory which defies physics in order to have occurred  the earth formed later some 4.7 billion years ago.  Right from the start this Big Bang is in argument with the account of creation because Genesis sees the earth created first (Genesis 1:1) and the universe (heavens) created second (Genesis 1:8).

In the beginning God created the heavens and the earth.  The earth was without form, and void; and darkness was on the face of the deep. And the Spirit of God was hovering over the face of the waters.  (Genesis 1:1-2)

We all should agree, whether Christian or otherwise, that the creation of the earth and the universe was a miraculous occurrence.  However, for the Christian, the bible accounts hundreds of miraculous events which are not (typically) debated among Christians.  Some of these are: (a) Jesus raising from the grave on the third day (1 Corinthians 15:4), (b) Jesus appearing in bodily form after His resurrection (2 Timothy 1:10), (c) Jesus walking on water (Matthew 14:22-33), (d) Jesus raising Lazarus from the dead (John 11:11-44), (e) Jesus healing many including giving sight to the blind (Isaiah 35:5, 29:18 Luke 7:22, 4:18 John 9:32, 11:37) and many, many others.  To state the obvious, none of these miracles meet scientific criteria as they are supernatural and violate known physical laws.  By the same logic (as imposing the billions of years on the creation text of Genesis), should we also modify the miracles listed above as to meet modern scientific theories?  The answer is: of course not!

Therefore, when we take worldviews such as TBBT from outside the biblical text and impose its criteria on God’s Word we are denying The Creation miracle.  This is denying God of one of His greatest miracles of all!  God felt it was so important that he imposed the remembrance of this event in the ten commandments.  God called us to work six days and rest on the seventh day (The Sabbath Day).  We do this to remember this creation week itself.

Why should any Christian believe in some of the miracles in the Bible such as the bodily resurrection of Jesus, yet deny the clear account of creation as written in Genesis?  None should!

Perhaps it is time for all Christians to stop behaving as cafeteria style believers.  Getting big portions of the miracles and promises we like for yourselves, all while passing on those miracles that are found “ignorant” to the modern day mainstream worldview.

God didn’t need evolution to complete creation.  God didn’t even need 6 days to create the universe.  No, God used 6 days as an example for eac of us to follow for our work week as described in the ten commandments.  Remember, God is Omni-present (all places at once past, present, and future: Isaiah 66:1-2), Omni-potent (all powerful: Jeremiah 32:17), Omniscient (all knowing: Matthew 6:6), and He never changes (Hebrews 13:8).    Therefore, God created all things including time itself.  God is outside the domain of time, outside the boundaries of the universe, in a place we call eternity.  The manmade ‘wisdoms’ such as evolution or theistic evolution defile Gods’ miracles.  As Christians we should not deny God of ANY of His miracles recorded in the bible.  However, we should certainly NEVER deny God of His marvelous work of creation!