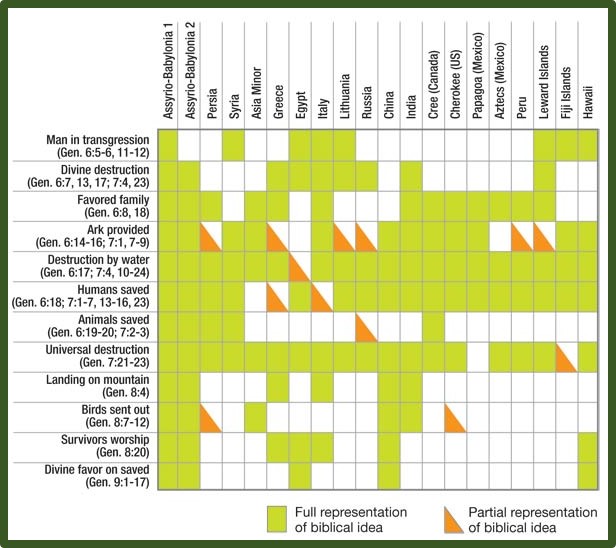 Legends of a global or massive flood have been recorded by non-Christian cultures all around the world with details that match those of the bible. Such evidence supports the reality of the event in human history.

It’s popular today for Christians to believe (as modern scientific dogma dictates) that Noah’s flood was a local event. Most don’t believe the great floods evidenced by massive fossil records were global but local. People want to fit the evolutionary time scales of millions of years into God’s Word and this is done at the expense of the account of the global flood of Noah.

But are there legends regarding a massive global flood recorded around the world? Yes! Cultures all over the world have flood legends. These legends differ in details but their existence helps to confirm the account of the global Flood in the bible. After all, there must have been a catastrophic Flood to inspire all these hundreds of similar legends.

Genesis, informs us that the flood waters covered all the highest hills “under the entire heavens” and that every single living thing on land died. Only those on the ark were spared. Of course, a local flood wouldn’t cover all the high hills under the heavens. And it couldn’t kill everything on land. If local, birds could’ve flown away; animals and people could’ve escaped to higher ground. No, the Bible clearly declares: Noah’s flood was definitely a worldwide event.

Legends abound of massive flood waters covering everything, animals getting on a big boat, and even a rainbow in the sky afterward. Sound familiar? Although these legends are somewhat distorted and are cultural memories passed down by story, they are nonetheless possibly a historical account of a real event—the global flood of Noah’s day.

One legend comes from a people group in Tanzania. It tells of an old man, his wife, and their son and daughter-in-law. All of the world’s water in lakes and oceans hung in a small pot in their hut, and it was not to be touched. But the curious daughter-in-law touched the pot and it smashed, causing a flood. All the people and animals on Earth drowned.

One confirmation is the Flood legends found in cultures all over the world—from Australia to Mexico to China. After the Flood and the rebellion at the Tower of Babel, people were dispersed and sent around the world. They took with them the account of the Flood from their ancestor Noah and his sons. Over time, this true account got twisted as it was handed down to each new generation. But the real account is preserved for us in the Bible.

“Flood legends abound on every inhabited continent. The number of legends has been reported as high as five hundred. Their similarities to Genesis indicate a common source. For example, legends from Assyrio-Babylonia, Asia Minor, China, India, Persia, and the Cherokee people of the United States tell of birds being sent out, often even specifying a dove and/or a raven. Several of them tell of a favored family, and in the vast majority, the flood was global. These and other similarities point to a very real, historical event.” (1)