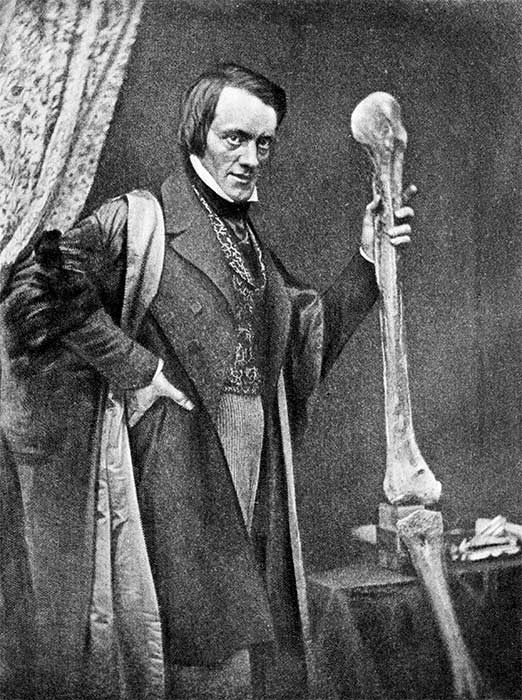 The word “dinosaur” wasn’t coined until 1842, prior to this date, the word used for such mighty reptiles was “dragon”. In fact, the terms dragon and dinosaur were used interchangeably in scientific writings throughout the nineteenth century.

The word dinosaur was invented in 1842 by Richard Owen, an evolutionist, meaning literally “terrible, powerful, wondrous lizards”.  Prior to 1842 such animals (and fossils of these animals) were referred to as dragons. In fact, the terms dragon and dinosaur were used interchangeably in scientific writings through the nineteenth century.

In China today, where dragon history is very rich, scientists still refer to these animals as dragons.  Contrary to popular thought, dinosaur is a relatively new word and therefore is not found in the bible just as neither is automobile or computer.

A little known fact indicates that man killed this animal (as many fossils are discovered without their heads). Only men, when killing an animal, take only the head.”

So what happened to the dragons? They simply went extinct like many other species have. We even know the reason why they went extinct. Historical records show that dragons like to live in caves. They also show that dragons like to eat sheep. Dragons Were a threat to many farmers and their livestock. You have heard of the term Dragon Hunter haven’t you? That’s because they were actual dragon Hunters in history. Wolves almost went extinct in America for the same reason.”

“The Myth of Dinosaurs the Reality of Dragons”, July 06, 2017 by Ben Armstrong
https://wsau.com/blogs/ben-armstrong-blog/20344/the-myth-of-dinosaurs-the-reality-of-dragons/

The name Dinosauria is first published in Owen’s Report on British Fossil Reptiles, which was published in 1842 as part of the Report from the 11th meeting of the British Association for the Advancement of Science. Owen used three genera to define his dinosaurs: the carnivorous Megalosaurus, the herbivorous Iguanodon, and armored Hylaeosaurus.