Intelligence is communicated by purpose. Humans constructed the wheel to make moving larger objects easier. Wheels have an undeniable purpose. The wheel might be constructed of wood from a tree and iron nails from the earth—but the wheel is unnatural. Does intelligence therefore manifest as “unnatural” ?

“Naturalism” concludes that a physics-based Cause & Effect relationship can explain all natural material phenomena. And this is what we observe every day right before our own eyes. Therefore, “Naturalism” begins on very sure footing by leaning on well-supported and undeniably correct conclusions in the present called causality.

As an illustration, imagine a vast string of dominos, some going straight, others turning off into other directs. Cause→ Effect →Cause → Effect…

Is intelligence Natural or Unnatural ?

Intelligence is communicated and revealed by purpose.  Humans constructed the wheel to make moving larger objects easier.  Wheels have an undeniable purpose that was created by intelligence.  The wheel is constructed of wood from a tree and iron from the earth—but the wheel itself is still unnatural.  Purely materialistic processes would have never formed the wheel– intelligence was required.

Life on earth relentlessly transforms the natural into unnatural structures. This transformation occurs through the injection of intelligence to fulfill a purpose.  We might attribute this intelligence, abilities, or know-how as instinct, learned behaviors, or genetic innate abilities. Regardless, intelligence itself exists outside the tangible and natural material world. Intelligence is not tangible but is identifiable.

To mention a few examples, we observe common insects displaying extraordinary intelligence, such as spiders constructing web hunting traps, ants building complicated hill communities, termites erecting multi-generational structures, bees honeycomb hives, and caterpillars transforming within cocoon enclosures, etc.  There are perhaps millions of other examples, and these are just the abilities of insects.

Is it only by the injection of intelligence (however it was first caused or obtained) that derives these many spectacular but unnatural effects?  Arguably yes!  How so?  As humans, we know that only through our collective intelligence, working with natural materials, such amazing structures and their intended purposes, are accomplished.

We know that a pile of bricks will never construct a building without intelligence and know-how.  Naturally, like bricks do not assemble buildings, the spider’s silk does not construct a web either.  This, too, requires intellect.

Intellect, as far as we have ever observed it, in whichever form it manifests, from all the evidence we have ever examined, has emerged only from the volition of a mind to fulfill a purpose.  But where does this intellect emerge for living things?

The answer is information comes from The DNA molecule.

This is where material naturalists take a hard right exit.  The ideology must exit, regardless of the logic or the evidence pointing to the contrary.  Naturalism must conclude that these unnatural effects caused for a purpose in life are not due to intelligence at all.  Just like gravity and snowflake formations, these are caused only by natural causes– all else is merely an illusion.

Francis Crick, the cofounder of the structure of DNA, wrote extensively about the dead-end conclusions of Naturalism.  Crick concluded that everything is atoms and subatomic particles vibrating within a universe-sized vat.  Everything happens because it must—predestination.  Everything is explained by physics- there is no such thing as purpose.  The mind, intelligence, and purpose are illusions.

“Just a bunch of neurons…You, your joys, and your sorrows, your memories and your ambitions, your sense of personal identity and free will, are in fact no more than the behaviour of a vast assembly of nerve cells and their associated molecules.”

The Theory of Intelligent Design connects “unnatural” intelligent effects with the natural world.

Evidence confirms that information can be considered a fundamental entity like energy or matter. However, information is distinct because it not only always has a causative factor but also never arises by random chance and emerges only as an intentional act (will) of its intelligent sender.

From an engineering perspective, information as an entity is identifiable by specific components.  Those components include (1) signal or symbols, (2) code or language, (3) meaning, (4) purpose.

DNA has all the components of information.  Symbols: DNA uses amino acid “letters” as an alphabet.  Code: DNA uses a vast language-like programming code, complete with spell-check enzymes and punctuation.  Action: This programming code functions as The Universal Genetic Language that assembles all life forms.  Purpose: Life displays purpose from the deepest oceans to the highest mountain tops.  A purpose that persists outside the tangible, outside material naturalism.

DNA connects the natural to the unnatural–to the supernatural!

Like all life forms, DNA molecules are constructed of natural and material elements. However, information seems to transcend the material. Are we merely cosmic accidents that have become seemingly self-aware? As Crick claims, are we just fooling ourselves that our intellect and purpose are only illusions?

Ironically, Crick, the author of his many books, would have never been understood if we had just weighed his books. His information is not the raw sum of the paper pages or the weightiness of the liquid ink printed onto the pages. Crick’s message is not understood by only the natural and material components of the book itself. Crick’s message and purpose are revealed only by careful and intelligent assembly, sequences, and language arrangement. Ironically, Crick uses his intellect to convince us that intellect, like self and purpose, is only illusionary.

The DNA molecule, like the paper and ink of a book, contains the material information, but only by the intelligence of its author are the sequences arranged– raw nature cannot do this. Information is carefully arranged in DNA upon purely natural materials, but meaning and purpose are only understood by life.

To deny meaning and purpose in life is to deny one’s own existence. 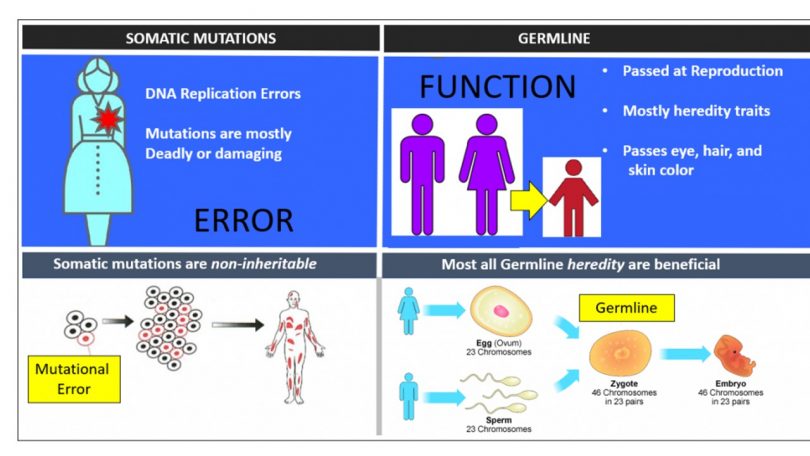 The "problem" for The Theory of Universal Common Ancestry of all Life is it hinges upon both (1) normal reproduction plus (2) many millions of presumed “good” mutations in the germline that accumulate to beneficially...