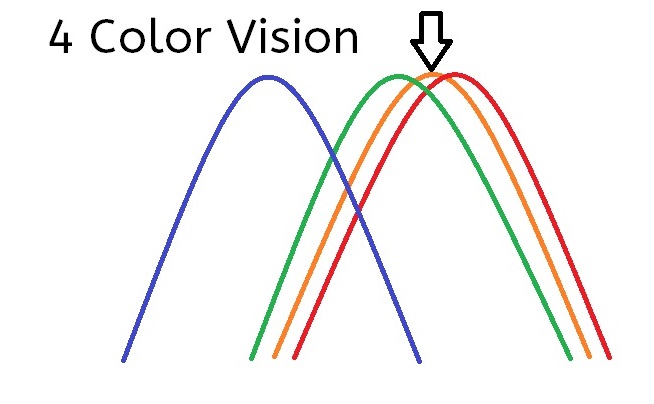 Most people have three spectrums of color vision of R, G, B (red, green, and blue). Tetra means four so those that have a fourth receptor, called tetrachromatic vision, allegedly can see more spectrums of color. Is this an example of a beneficial mutation such as those expected to have provided common descent evolution?

Tetrachromacy has been proclaimed as a beneficial copy error mutation that directly provides superhuman vision. The average human can distinguish about one million colors. Those that carry the fourth receptor mutation claim they might be able to see perhaps 100 times more color variation than this.  I put might in italics because, as of today, there are no established empirical methods to verify whether an individual actually has a “tetrachromat genotype” or not, let alone what additional colors they might be able to distinguish. It remains unknown whether the ability to see more colors exists but the mutated condition is verifiable.  (see primary illustration for the 4-color vision).

Those that claim such tetrachromatic vision, which possesses the mutated trait, seem only to possess normal and sufficient vision. The claim is a random copy error mutation provided this amazing vision by duplicating a protein formation.  But is this ability for supervision proven within the population that has this mutated genetic sequence? Not really.  Allow me to explain.

There are at least three known genes in the eye’s retina that have been degraded by spontaneous mutations, which directly caused color blindness in those affected.  Color vision deficiency (called color blindness) represents a group of conditions that affect the perception of color due to these degradative mutations.   What do these mutations have to do with tetrachromatic vision?  Read on.

“…mutations, deletions, and rearrangements of the genes that encode human (retinal proteins) can result in deficiencies in red-green color discrimination (color blindness) for some individuals.”

Tetrachromacy is considered the result of a genetic mutation, which occurs in color-blindness because it is that same defective protein but in some, the cone functions normally.  Or as some claim, in a superhuman fashion.  However, unlike those afflicted with color-blindness, the cone types belonging to a tetrachromat function just fine. Therefore, the mutation which directly caused color blindness in most might also provide tetrachromacy in others.   Scientists figured out that the best volunteers were women who had fathers or sons with color blindness because they were likely carriers of this mutated eye gene. It appears that if the mutation occurs on both x chromosomes in a woman, then they are more likely to be tetrachromatic. And there’s indeed a good genetic reason why tetrachromats are more likely to be women. The tetrachromacy mutation is only passed through the X chromosome. https://www.feelgoodcontacts.com/eye-care-hub/a-guide-to-tetrachromacy

Tetrachromacy is considered the result of a genetic mutation I to that which occurs in color-blindness. If such vision is proven to be factual, then tetrachromats have gained one extra type of cone that allows them to see a “fourth dimensionality” of colors.  That same extra cone directly caused color blindness.  Most people have three cone types at the back of their eyes which allow them to see colors. Those who are tetrachromatic have a fourth cone which enables them to see more colors. However, unlike those who are color-blind, the cone types belonging to a tetrachromat function just fine.  How or why is largely still unknown.

There has been lots of research into tetrachromacy, including the 2010 Journal of Vision Study. This study identified a tetrachromat using color testing. The study also stated that up to 12% of women have four cone types.  Nevertheless, only “1 of 24 obligate carriers (in the study)…exhibited tetrachromatic (color recognition beyond normal levels) behavior on all our tests.”  Which ultimately means only one person.

Regardless of whether tetrachromatic vision turns out to be authentic or not, the reason that such a mutation that is known to cause color blindness but for some unknown reason does not cause this disability in others is vastly unknown and yet mysterious.   Therefore, did a spontaneous copy error (duplication of genetic material) mutation directly cause tetrachromatic vision?  If it is real, then it seems that the answer is yes.  However, strangely, this is the exact degradative mutation that directly caused color blindness.  It seems that there are many dynamically complex biological factors behind this mystery.  Claiming that a copy error mutation provided this alleged superhuman ability remains unproven.