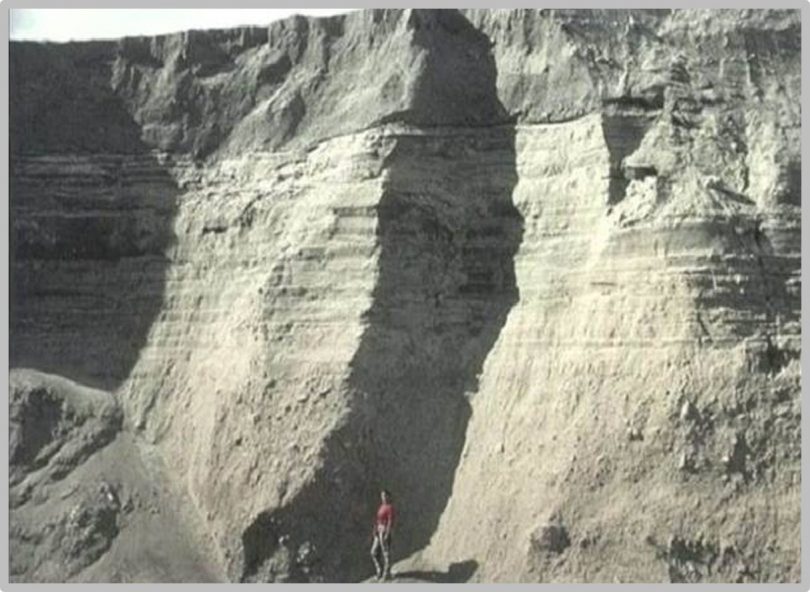 From eyewitness reports, photographs, and monitoring equipment, it is known that this whole deposit formed in just three hours, from 9 pm to midnight on 12 June 1980.1

It was deposited from black clouds of fine, hot ash mixed with gas, blasting at high speed from the volcano—a pyroclastic flow. Ash-laden and heavier than air, the flow surged down the side of the volcano and along the river valley at more than 160 km/hr (100 mph), hugging the ground and depositing ash.

The big surprise was that the sediment deposited in fine layers called laminae. You would expect a catastrophic, high speed ash flow to churn the fine particles and form a uniform, well-mixed deposit. Thus, it had been conventionally thought that fine layers had to accumulate very slowly one upon the other over hundreds of years. But Mount St Helen’s showed that the coarse and fine material automatically separated into thin, distinct bands, demonstrating that such deposits can form very quickly from fast flowing fluids (liquids and gases).

Since then, laboratory experiments have shown that fine laminae also form quickly from flowing water.2 This shows how finely-layered sandstone deposits in other situations, such as some of the lower layers in the Grand Canyon,1 likely formed rapidly, which could have happened within the time-scale of Noah’s Flood.”