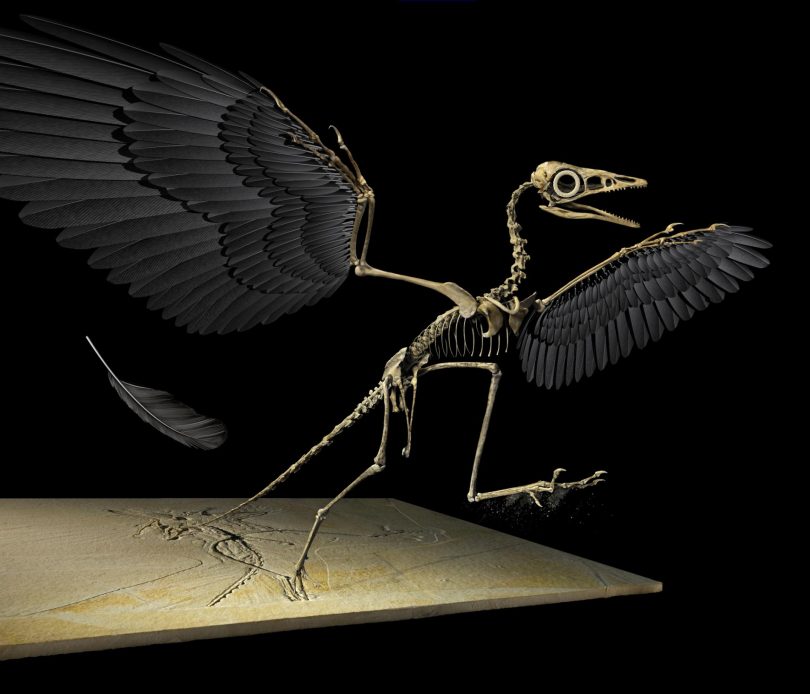 The diversity of life emerging by naturalistic and evolutionary mechanisms require mathematical miracles . Flight itself requires additional miracles by fine tuning the organism from bones to feathers. Therefore the concept that something as massively complex being proposed as “evolving many times” is exponentially absurd. Yet evolution requires such astounding occurrences to make the evidence, such as bird fossils, to fit the dinosaurs to bird evolutionary story.

The bladed, quill-like feathers of modern birds are essential for flight, and over millions of years they have become highly specialized for this purpose. But this may not be the reason they first evolved, say researchers studying an unusually complete fossil of the world’s first bird, Archaeopteryx. Instead, the team believes birds first grew these feathers for other purposes, such as insulation or mating display. The discovery raises the intriguing prospect that flight may have developed multiple times in the ancestors of birds. “

The rationale for the bird “problem” as birds appearing early (and late) in dinosaur fossil layers and into modern day, is to offer the “save” that perhaps flight in birds may have evolved multiple different times over millions of years. This is offered despite the obvious paradoxes that something evolving once is stunning enough, but to evolve flight multiple times seems absurd in the highest degree.

This raven-sized flying creature with sharp claws and teeth lived about 150 million years ago in the late Jurassic period. In previous specimens, the tails were often not properly preserved, sometimes because paleontologists chipped them off while trying to examine the skeleton. In 2011, a new specimen with a fully preserved tail was discovered in Bavaria. It had feathers on its wings that were clearly adapted for flight: They were asymmetrically shaped and overlapping in such a way as to make them more aerodynamic. But it also had feathers on several other parts of its body, including its hind legs.”

Massive variations exist between birds of flight and birds unable to fly.

Birds of flight are highly specialized in their physical anatomy, respiration, circulatory system, metabolism, bone density, skeletal muscles, and feathers to enable the amazing feat of flight. Birds of flight are able to provide the necessary oxygen and metabolic substrates required for the ultra high metabolic rate necessary for flight. Other specialized characteristics include gas exchanges unique in the lungs of flight birds as compared to lungs in non-flight birds. Additionally, higher hemoglobin concentration in the blood and capillary density in the flight muscles are also present in birds of flight.

More physiological adaptations for birds of flight include the availability to migrate in low oxygen environments such as at high altitudes. Additionally, the energy cost of flapping flight also increases hemoglobin to an affinity to allow higher oxygen to meet demands by the bird. Birds of flight also have an effective ventilation of the gas exchange surface of the lungs, and a greater capillary-to-fiber ratio than non-flight birds. Birds of flight, especially migrating birds, use fatty acids as their main source of energy, so they have to be transported at a sufficient rate to meet the high demand.

Birds of flight use fatty tissue for energy at a staggering 8–10 times more efficient rate (per gram) than even stored glycogen.(1) The energy efficiency displayed by birds of flight is nothing less than astounding.

…these are just some of the amazing characteristics of a bird of flight.

The structures are too different including the respiratory and bone structures. If feathers are used for flight then, “Aerial locomotion obviously places rather tight constraints on an animal, because, if there’s one fault in your design, you’re dead.”

The quote above is the ultimate slayer of the absurd concept that birds evolved flight– ever. But to answer the fossil record, just to retain the idea that birds evolved from dinosaurs, with the audacity that such an evolution of flight occurred “many times” is idiocy. Why is explained well enough in the Science article above because if evolution renders: “one fault in your design–you’re dead”. Flight must be a design that was fully functional from the beginning with specialized physical anatomy, respiration, circulatory system, metabolism, bone density, skeletal muscles, and feathers. Believing the presence of feathers somehow equate to flight is absurd in the highest degree.

Birds are clearly a marvelously designed creature. The attempt to explain the origins of such a magnificent and graceful animal of flight by random chance through evolutionary processes is preposterous.

To explain the presence of birds in the fossil records by offering the conjecture of multiple lines of evolution simply stretches the imaginary perimeters of naturalism too far!