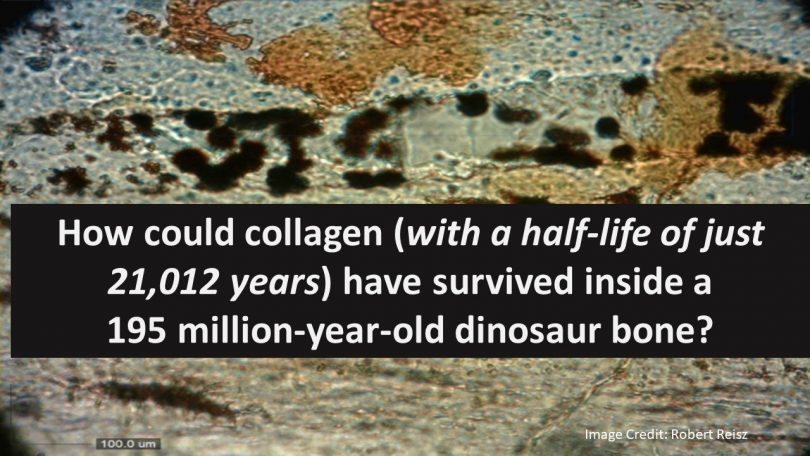 Collagen is a protein sometimes found in fossils. A new spectroscopy technique measures collagen decay rates as it decays under heat, confirming collagen’s decay half-life as only thousands of years as a maximum. Yet, dinosaur fossils supposed as being nearly two-hundred-million-years old contain the collagen protein. How? Clearly, both presumptions cannot be correct.

Collagen is a tough, stringy protein that holds bones together. Collagen is a protein that provides a soft framework, and calcium phosphate which adds strength and hardens the framework. This combination of collagen and calcium makes bones both strong and flexible. More than 99% of the body’s calcium is contained in the bones and teeth, with only about 1% percent found in the blood.1

In the article “Collagen Decays too fast for the evolutionary time,” we discover secular scientists struggle to explain why many techniques have found positive detections of collagen in fossil bones.2

The heart of the “problem” is collagen’s relatively short shelf life which up until the soft tissue discoveries of the last few decades was thought to be completely decayed within no more than four million years. However, rather than adjusting the timelines to meet the data, researchers sought to find reasons HOW these structures survived known decay rates.

Under the most recent spectrometry technology, studies reveal that collagen would not likely remain for even one million years.-2 Prior studies accurately measured collagen content, but more precisely, knowing collagen’s decay rate would set a sharper outside age limit for fossils that still contain it.2

“…bovine bone collagen held at 59˚F would decay with a half-life of 21,012 years under ideal conditions. At that rate, collagen would not last even one million years.”

Recently collagen was discovered within a (supposed) 195 million-year-old dinosaur fossil. “The characteristic infrared absorption spectra of collagen and protein provide undeniable, clear evidence that collagen and protein remains were preserved inside the osteonal central vascular canals of this early dinosaur…(such) proteins in collagen are closely tied to their particular animal group which… (work) like soft-tissue “fingerprints.”3

Iron is the magic perservative for hundreds of millions of years?

“By analyzing the sample without dissolving the bone, “we can…identify the source of the collagen in a very direct and precise manner,” Reisz says. “We’re finding that it’s within the vascular spaces of the bone where blood vessels would have been in the living animal.”

Despite the article’s concern over where the collagen emerged, which is stated due to the obvious “problems” such a claim imputes toward the evolutionary timelines that long held a maximum of 4 million years, collagen still is present. The theory that scientists are clinging to here is the idea that iron can serve as a preservative to hold these molecular structures together for many millions of years. This speculation is more hopeful than scientific; many studies have soundly refuted this still repeated claim.

The hypothesis that iron contributes to preservation in deep time, perhaps by both free-radical-mediated fixation and antimicrobial activity, is supported by data…iron in their blood…did knock back germs (for a period of time) that would have devoured the bird bone soft tissue…”

Schweitzer, M. H. et al. 2013. A role for iron and oxygen chemistry in preserving soft tissues, cells and molecules from deep time. Proceedings of the Royal Society B. 281 (1775).

Therefore, iron can initially preserve the specimen from germ consumption, but this also is a limited time. Also, as we noted at the beginning of this article, only 1% of collagen is found in the blood.1 Could scientists continue to be so fortunate to find every soft tissue, including collagen, came from areas that contained blood? This seems very unlikely at best.

Also, there are at least five other observations that refute the hypothesis that iron contributes to preservation in deep time. One study found that iron actually is damaging and reactive in organic structures, which would cause more rapid decay.2

Biochemist Josef Prousek of the Slovak University of Technology wrote, “Due to (iron’s)…strong reactivity…(it) is capable of doing more damage to biological systems than any other reactive organic species.”

For now, scientists are still trying to figure out how these protein fragments really managed to last so long in the first place.”(bold and italics are mine).4