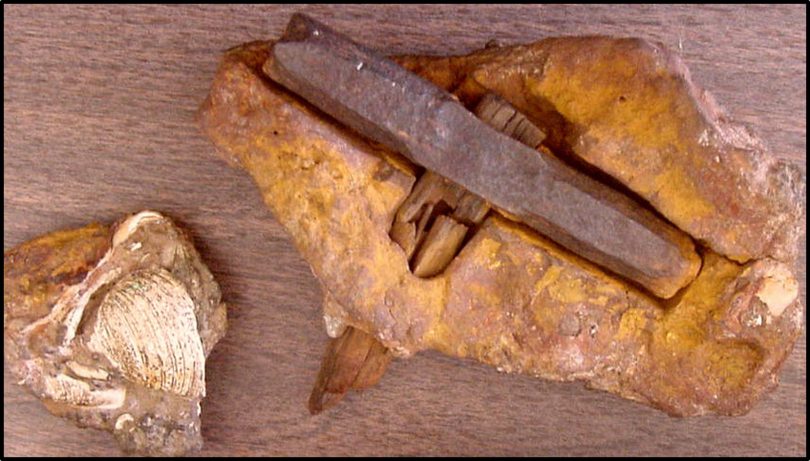 An internet stir: did aliens bring this ‘ancient’ simple iron hammer to earth? Funny right? But the discovery does not fit right with the timelines assumed by evolution. Here, a miners hammer perhaps a few hundred years old was found in assumed 400 million year old fossilized rock. Such apparent dilemmas exist because the assumed ages of rock layers and fossils don’t match the age of the iron hammer. Another example of rapid fossilization and erroneously dated rock layers.

A miner’s iron hammer found fossilized in solid rock from the Ordovician strata thought by evolutionists to be more than 400 million years old. This seeming logical anomaly can cause quite a stir on the internet as people try to reason ancient rock layers with an iron hammer. Much is the same logical dilemma when artifacts and historical writing record mankind’s encounter with dragons.

Such thoughts are confounding, like trying to fit square pegs into round holes. These “puzzles” cause a disconnect from the what is right in front of our eyes from what we “know” about fossils and the age of the earth. Thus the dilemma: due to all the years of evolutionary indoctrination (from television to movies to grade school to university) we believe that fossilization processes take eons of time. We believe that they take many tens of thousands or even millions of years to form, so a miners hammer in such an ancient medium is stunning. However, what we have not been taught is to think on our own because the age of the earth and fossils are merely assumptions– and not facts.

ANSWER: Aside from alien miners or time traveling geologists, how could items of recent history like an iron miners hammer be inside 400 millions of years old fossilized rock? Well, they can’t be— something is clearly wrong. Looking at the evidence, obviously the hammer is not ancient and was man made being at most a few hundred years old. However, the fossilized rocks that encase the hammer are assumed as being hundreds of millions of years old despite such a claim being both unobservable and unprovable. Therefore, the known age of the hammer is correct and the assumed age of the fossil is wrong! Very wrong…400 million years wrong!

Therefore, such evidence of a fossilized miners hammer devastates the evolutionary worldview assumption that these fossilized rock layers are hundreds of millions years old.