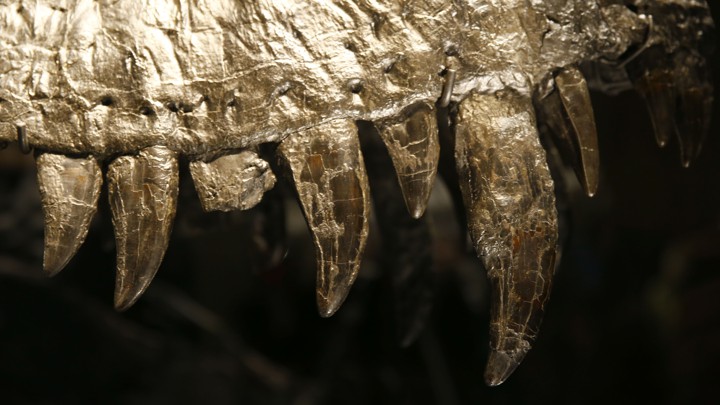 The dating paradox: Dinosaur bones presumed as being roughly 100 million years old contain proteins original to the dinosaur; Protein has a maximum detectable range of 30,000 years. Solution: The protein and its decay rates are scientifically proven while the age of the fossil is assumed. Therefore, the age of the fossil is not millions of years old but no more than 30,000 years old.

Proteins decay even faster than Carbon 14 (which has a half life of 5,730 years).
Most of proteins should be detectable between 3,500 and 22,500 years for testing limits.

Therefore, any conclusion that any fossil (or sample or rock layer) which proclaims conclusions beyond these limits are therefore false.

Such time limits renders any conclusion which identifies either the sedimentary layers and/or the fossils within them have an age greater than 30,000 years old are invalid, because protein decay rates are observable in the present and rock layers or fossils are not observable as to when they were formed, the dating should be ruled by the known decay rates of protein and not based on evolutionary time scales of millions of years.

Fossil soft tissue in dinosaur bones has been a controversial topic among researchers for quite some time. Hard tissues, such as bones, eggs, teeth, and enamel scales, are able to survive fossilization extremely well. Soft tissues, such as blood vessels, cells, and nerves—which are stored inside the hard tissue—are more delicate and thought to decay rapidly after death. These soft tissues are composed mainly of proteins, which are believed to completely degrade (much quicker)…than the dinosaur bones (which) are much older, roughly 100 million years old, (yet) they occasionally preserve organic structures similar to cells and blood vessels. Various attempts to resolve this paradox have failed to provide a conclusive answer.” said Yale paleontologist Jasmina Wiemann.

My PhD work focused on how soft tissues fossilize and how these materials break down. Some molecules can survive in the fossil record, but I suspect proteins can’t; they’re unstable on those timescales in the conditions of fossilization,” explains Saitta.

“There’s clearly something organic in these bones.”