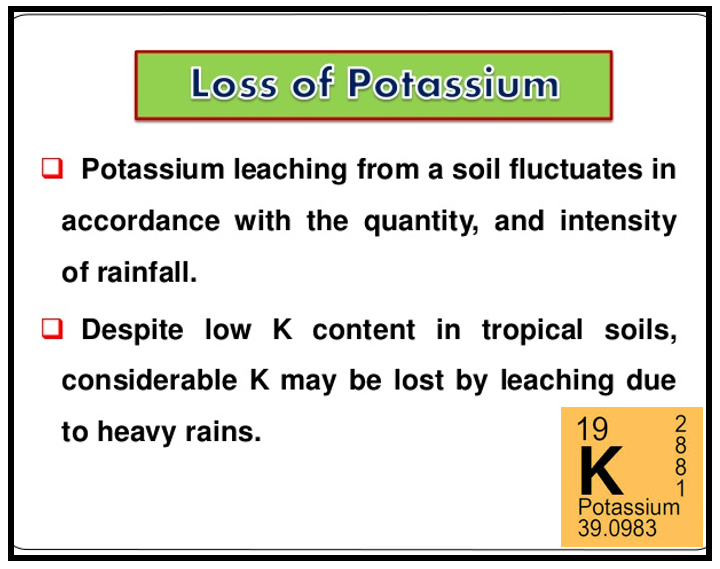 Potassium-Argon radiometric dating is used to establish dates of lava flows. It has been well established that even the washing of water over these deposits can reduce the total Potassium by as much as 80% which will increase the ratio of Argon and result in false old age dating. The reality of water running through any sample on earth is a strong problem for any reliance on this dating method.

“Potassium (K) is lost by 80% with only 4 ½ hours of distilled water being washed over the specimen”.

Running water dilutes potassium levels rapidly which equates to artificially older dates on specimens. This equates to this dating method becoming invalid because running water is abundant and may occur anywhere on earth or in the unobserved past.

Ask any farmer and they can tell you about the loss of potassium in soil because each year they have to drop fertilizer on their crops. Dating methods that rely on a decay rate between parent and daughter with potassium are rendered invalid.

We know the true ages of (flows) observed to form less than 50 years ago. Yet these yield ‘ages’ up to 3.5 million years which are false. How can we trust the use of this same ‘dating’ method on rocks whose ages we don’t know? If the method fails on rocks when we have an independent eye-witness account, then why should we trust it on other rocks where there are no independent historical cross-checks?

The radioactive potassium-argon dating method has been demonstrated to fail on 1949, 1954, and 1975 lava flows at Mt Ngauruhoe, New Zealand, in spite of the quality of the laboratory’s K–Ar analytical work. Argon gas, brought up from deep inside the earth within the molten rock, was already present in the lavas when they cooled. We know the true ages of the rocks because they were observed to form less than 50 years ago. Yet they yield ‘ages’ up to 3.5 million years which are thus false.(1) (see chart below)

How can we trust the use of this same ‘dating’ method on rocks whose ages we don’t know? If the method fails on rocks when we have an independent eye-witness account, then why should we trust it on other rocks where there are no independent historical cross-checks?

The K–Ar (potassium-argon) dating method is not usually used to date (by radiometric methods) fossils because these specimens rarely contain suitable radioactive elements. A common way of dating fossils (and rocks which do not contain radioactive elements) is by ‘dating’ an associated volcanic rock. This is commonly done using the K–Ar method. It depends on the rate at which radioactive potassium decays into the gas argon.(1)

The K–Ar method works on the assumption that the ‘clock’ begins to ‘tick’ the moment that the rock hardens. That is, it assumes that no argon derived by radioactive decay was present initially, but after the lava cooled and solidified, the argon from radioactive decay was unable to escape and started to accumulate. The problem is argon is present even in recent flows and not due to radiometric decay processes. Therefore, it is well-known that if a radiometric ‘date’ contradicts a fossil-derived (evolutionary) age, the date is discarded as erroneous.(1)

To save this fatally flawed dating method scientists will simply state that this dating method cannot be used on “recent” lava flows (of less than 10,000 years). This seems to be very convenient because this way there is no way the results can be disputed because the assumed dates are based on unobserved lava flows. The bottom line is: if Potassium-Argon dates cannot be relied on to accurately date recent lava flows that occurred in the observable present, then obviously this dating method can neither be relied upon to date anything assumed to have occurred in the distant past.

This dating method is riddled with errors based on the ease at which potassium is washed from the materials and also based on its consistent exponential errors on known lava flows.