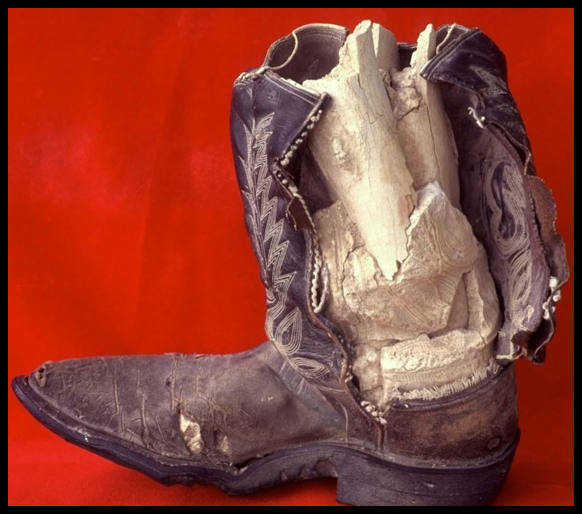 A human leg and foot bones found fossilized to solid stone inside a rubber-soled cowboy boot. The discovery was made in a dry creek bed near a west Texas town. How could this cowboy be thousands or even millions of years old inside a century old boot? Another mystery created by an ancient earth and ancient fossil mythology.

This amazing discovery by Jerry Stone in 19801 appears to be a great mystery because the modern naturalistic worldview (evolution) of an earth billions of years old describes such fossils as being many thousands or even millions of years old.  Therefore, when a cowboy boot of perhaps a mere hundred years (common rubber sole use in boots began in 18712) was found with a fossilized leg yet inside of it, an apparent paradox emerged. How could this be?

Please don’t go skipping down the nutty road that wonders if the cowboy was perhaps an alien or a time traveler!

The seeming paradox is resolved simply by unlearning the modern worldview of an ancient earth. Whether any fossil is ancient is neither observable nor testable directly in the present. Ancient fossils are based solely on evolutionary assumptions.

Assumptions which begin with an ancient universe and later planet earth which spontaneously emerged and self formed- no one knows how. Then, on this “ordinary” randomly formed planet (we call earth), billions of years ago, the biggest assumption of all occurred: all living things spontaneously and randomly emerged and self assembled from non-living chemicals to become the first “simple” life forms- no one knows how. Then, very slowly, life “evolved” over millions of years, each generation somehow becoming better and more complex then the previous, became all the many millions of species of living organisms that live or have ever lived on earth– you guessed it: no one knows how.

In light of these wild assumptions, regarding fossils, what we actually find scientifically and experimentally is that the fossilization process can (and perhaps only) occurs rapidly. Science has shown that under unique chemical and environmental circumstances, that involve water and sediments created by flood waters, fossils are formed.

Time is an ingredient in fossilization. Experimentation reveals that fossilization is measured in days, months, or decades.