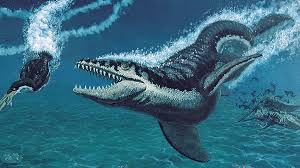 More trouble for evolution and its billions of years’ timelines: scientists continue to discover more collagen, translucent flexible blood vessels, osteocytes, intact red blood cells, proteins, bone marrow, and many other biological structures in dinosaur fossils. Evolution must have eons of time to give the concept of descent of species even a remote chance at being true. This window gets closed more and more with every passing year.

The fossilization process (is) detailed enough to preserve the shapes of individual cells. If these structures really are just the fossilized shapes of the osteocytes, it is exciting, but not incredibly surprising. However, Schweitzer’s team has done some detailed experiments to show that these aren’t just shapes. Indeed, these osteocyte structures still contain proteins and probably even DNA!”

We have discussed soft dinosaur tissues from various fossilized bones which are supposed as being millions and millions of years old. Yet, scientists have scientifically validated that these fossils are filled with soft tissues filled with large organic molecules. Findings have discovered collagen, translucent flexible blood vessels, osteocytes, intact red blood cells, proteins, and many other biological structures.

An interdisciplinary approach to understanding how large organic molecules such as protein and DNA could be preserved over time suggested that even if a fossil were kept at the freezing point of water, collagen (a protein found in bone) should decay away so that it becomes undetectable in less than three million years.”

This discovery is difficult if not impossible to understand under the traditional time lines established by Naturalism and evolution because such soft tissue and organic materials are known to decay fairly rapidly, even under the most ideal conditions. ” Nevertheless, collagen has been found in fossils that are supposed to be more than twenty times that old!“

Thus, the preservation of primary soft tissues and bio-molecules are not limited to large-sized bones buried in sandstone, but also (are found) in relatively small-sized skeletal elements deposited in marine sediments.”