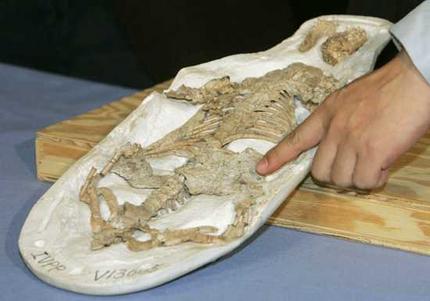 Evolution expects mammals to be squirrel sized during the dinosaur time periods but fossil evidence has been discovered to the contrary. A large furry mammal resembling a Tasmanian Devil has been found with dinosaur remains in his stomach. Such out of order fossils are a thorn in the side of evolutionary timelines.

Mammal fossils have been found with dinosaurs in their stomachs! This fossil has the distinction of being the largest early mammal ever found. It’s about the size of a modern dog, over 20 times larger than most mammals (presumed) living in the early Cretaceous Period.

“This incredibly well-preserved fossil ‘Repenomamus robustus’ had the remains of a small dinosaur in its belly. It is evidence that mammals dined on dinosaurs.”


National Geographic. A mammal fossil was found with remains of dinosaur in its stomach.

In 2005 researchers in China identified a small dinosaur known as Psittacosaurus amongst the stomach region of a fossilized furry mammal that resembled a Tasmanian devil. To find such an advanced predatory mammal came as a surprise to these researchers. The evolutionists had long maintained that the only mammals alive at the time of the dinosaurs were very small, like the supposed human ancestor that resembled a squirrel!”