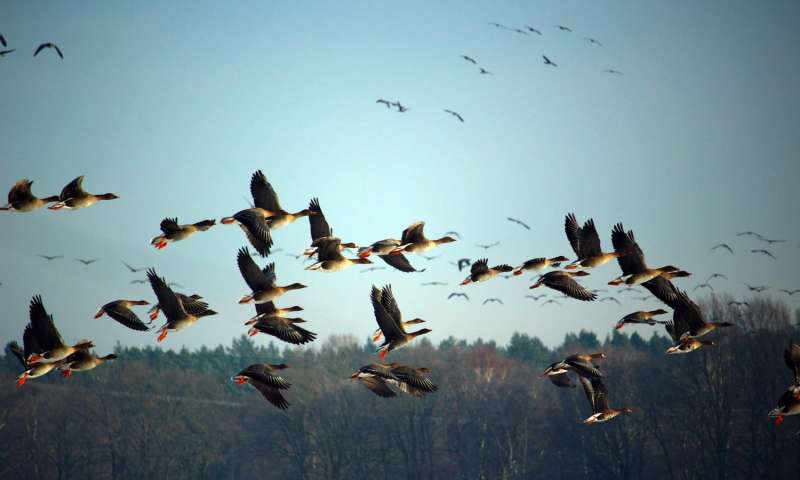 Birds display behaviors and intelligence which researchers are only beginning to understand. Such complex abilities challenge the ideas of evolution by bringing to question how such ordinary birds might have ever gained such ingenuity.

…the actions of individual animals sum together in ways that researchers are only beginning to understand, creating patterns of motion so complex that they seem to have been choreographed from above. Flocks and schools have a distinctive style of behavior – with a fluidity and a seeming intelligence that far transcends the abilities of their members.

Researchers have long recognized that birds and various other flying creatures change the positioning of their body structures in flight in order to perform specific maneuvers or adjust their aerodynamic profile to accommodate changing flight conditions.   It has also been discovered that birds fly in identifiable formations which reduce drag and help the animals retain critically valuable energy in the form of fat reserves.

“Birds are actually able to generate more total force on lift-off that enables them to not only push up and overcome gravity but to accelerate forward.”

Such observations have provided scientists data used to replicate more efficient and acute takeoffs into small flying machines such as drones.

Researchers also have found that birds can compensate for headwinds by increasing the frequency of their wing strokes (thereby flying faster) or they can compensate for tailwinds with fewer wing strokes. Whenever birds fly along the coast, they use the coastline to help them compensate for side-winds and avoid drifting, which is much harder when flying over open water. Furthermore, the size of the flock flying together also affects the speed birds can fly which researchers have yet to fully discover as to why. Studies also show that at thinner air found at higher altitudes also helps birds fly faster, and that the faster a bird rises upward in the air, the slower they move forward. Surprisingly, it has also been discovered that migrating birds usually fly at night thought to also help in maintaining energy efficiency lost flying under the hot sun. (1)

“Our results show that birds adapt their flight speed to several different factors simultaneously and independently of each other. This means that what to us may seem like a simple and straightforward type of behavior, that is flight speed, has (discovered) an unexpectedly complex background.“

“Bird flight is one of the most complex forms of locomotion in the animal kingdom. Each facet of this type of motion, including hovering, taking off, and landing, involves many complex movements.”