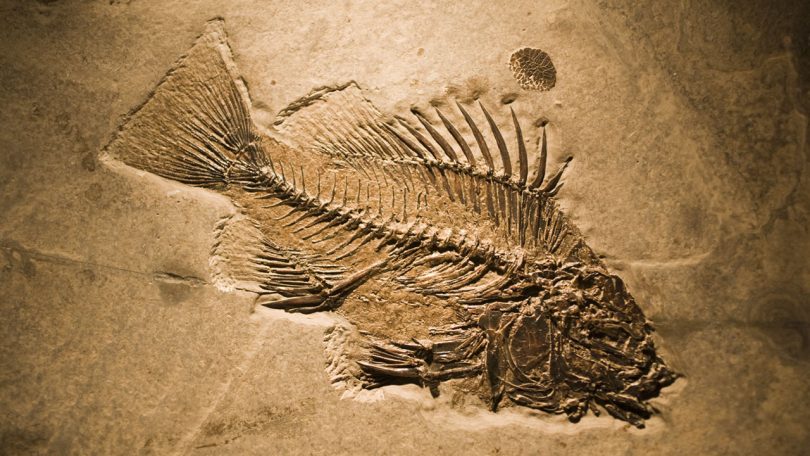 Allow a dead fish to float on a lake surface for a few days only to later return and discover very little evidence of the fish. We observe rot, scavengers, erosion, and entropy effectively, save a bone or two, erasing dead things. By contrast, cover a living fish in heavy wet sand and it will suffocate; Under the right conditions it could become wholly fossilized. Evidence of suffocation in a fish is marked by a raised dorsal fin. Countless fossilized fish have been discovered among the billions of dead things left fossilized throughout the massive sedimentary layers of the earth. Testifying of a unique event where sudden and catastrophic conditions brought about by massive flood waters caused mass death.

Slow and natural processes observed in the present fail to explain the remarkably well-preserved fish fossils discovered at the Green River Formation (in Fossil Butte, Wyoming). “Although naturalistic models have been modified, and became progressively more complex, the models still fail to account for the geological observations in the area.”

The ‘problematic’ observations include: variations in the number and thickness of laminae between time-synchronous events, the flatness and geographical extent of the layers, the presence of soft sediment deformation structures, fossils of bottom-feeding catfish, lack of evidence of scavenging, evidence that the fish suffocated quickly, and the abundance of fish coprolites.

Experiments on modern fish feces show that burial must have occurred in less than 24 hours.”

Thus, the Green River Formation is not valid evidence for long geological ages. Rather, all the above evidence is easily explained by a model where the Green River Formation was rapidly deposited in a series of catastrophic events, possibly the result of a series of extraordinary rainfalls. This simple explanation accords with the observations, and can be extended to other, similar deposition basins. This model fits with the 6,000-year time frame of the Bible.