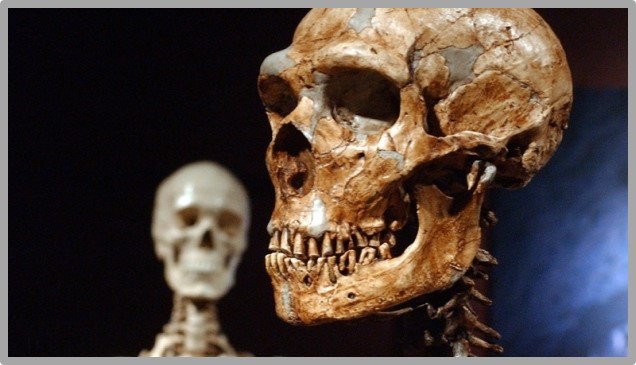 Since the first Neanderthal fossils were found in 1856 they were portrayed in museum displays and textbook drawings as a brutish “pre-human” species. However, despite continued spin on the internet, genetic mapping has confirmed that Neanderthal’s were always fully human. Evidence shows that they buried their dead with flowers, made jewelry, and painted just like modern humans. Genetic research has revealed that all humans today and Neanderthals share DNA that is within .12% similar. In other words: Neanderthals were always fully human despite the excellent and relentless story telling of evolution.

Neanderthals (or Neandertals) were a species or subspecies of archaic human, in the genus Homo, which based on evolutionary time scales claim they became extinct around 40,000 years ago.

Neanderthals were closely related to modern humans, sharing 99.7% of DNA.  The mapping of the human genome has determined Neanderthal were fully human.
As research has shown that all humans today are within .12% (less than one percent) identical within the same range given here.

Still synonymous with brutishness, the first Neanderthal remains were found near Germany in 1856. Until recently, they were still considered to be ignorant, ape-like, stooped and knuckle-dragging brutes. However, genetic and other evidence reveals that Neanderthal was just as human as us. Neanderthals are now recognized as skilled hunters, believers in an after-life, and buried their dead with flowers, made jewelry, and art work. They were even surgeons as one skeleton was discovered with a presumed withered right arm which had been amputated above the elbow.