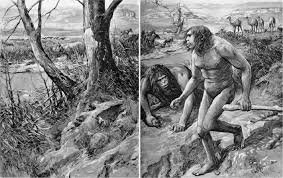 A powerhouse story was released in The London News, published with much fanfare by evolutionists, complete with vivid drawings of the discovery of an “ape-men” called Nebraska Man. The evidence consisted of a single molar tooth. The find was quickly hailed as belonging to “the first anthropoid ape of America ever found”. It wasn’t until three years later than an actual expert reviewed the evidence and broke the bad news: the tooth was not human in origin, rather, the molar tooth belonged to a pig.

In 1922, Harold Cook found a tooth while doing some geology near Snake Creek, Nebraska. Cook contacted Dr Henry F. Osborn of the American Museum of Natural History in New York telling Osborn “I have had here, for some little time, a molar tooth from the upper or Hipparion beds, that very closely approaches the human type. Osborn later replied to Cook after receiving the package in the mail, “The specimen appeared to be perhaps the first anthropoid ape of America ever found”.

By the next day a leading tooth authority, Dr W.K. Gregory, declared that Osborn was right. He agreed that the Nebraskan tooth was an upper molar from an anthropoid. They believed this indicated the first find of man’s ancestors in America and dubbed the find “Nebraska Man”.

Artist A. Forestier drew an elaborate and imaginative reconstruction of this early ancestor of man in an imaginary ancient wild.  This imaginative story was published as a double-page spread in The Illustrated London News and was quickly lapped up by evolutionists everywhere.

By 1925 it was discovered that vertically no leading expert who had actually studied the specimen ever thought it to be of human origin.

In the end, it was evolutionary scientists burning desire to prove evolution (or more importantly disprove God’s creation) that lead otherwise intelligent scientists to fail to question a pig tooth called Nebraska Man. Thus perpetrated a great fraud on the public in the name of evolutionary science.