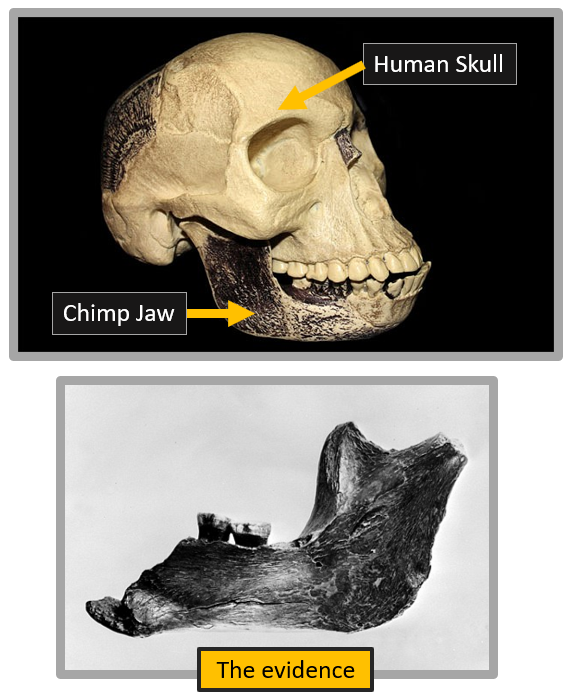 Yet, another front-page human evolutionary find was proclaimed as “The Piltdown Man”. Scientific tests confirmed that this portrayal consisted of “deliberate fakes” that were intentionally stained as to appear more aged. The portrayal combined a human skull with a chimp jaw. There are many other fraudulent examples which persist into modern day which begin on the front page complete with illustrations only to be quietly retracted later. However, such representations continue as to “teach” the false narrative of human evolution. Piltdown Man proved to be one of the most elaborate and carefully prepared hoaxes thus far.

Recent improvements in the technique of fluorine analysis made possible some of the tests which led three scientists to conclude that the mandible and canine tooth of the “Piltdown skull” were “deliberate fakes.”

Bulletin from the British Museum of Natural History.

…which were deliberately faked as to simulate fossil specimens.

Other tests showed that the outer coating on the mandible and teeth did not correspond to that on the cranium. The black coating on the canine tooth turned out to be not, as the first discoverers had thought, ferruginous but “a tough, flexible paint-like substance.“
Deliberate iron and chromate staining of the Piltdown jaw seems to us to be explicable only as a necessary part of the deliberate matching of the jaw of a modern ape with the mineralized cranial fragments.

The fraud did not emerge from the hands of amateurs or students but was perpetrated by distinguished paleontologist and archaeologists! The sixty-four thousand dollar question is: why would they do such a hoax? The answer is self-evident, they wanted evolution to be true so badly, believed it as being true so much, that they decided to manufacture their own evidence as proof!

“It is now clear (the investigators conclude) that the distinguished paleontologists and archaeologists who took part in the excavations at Piltdown were the victims of a most elaborate and carefully prepared hoax.”