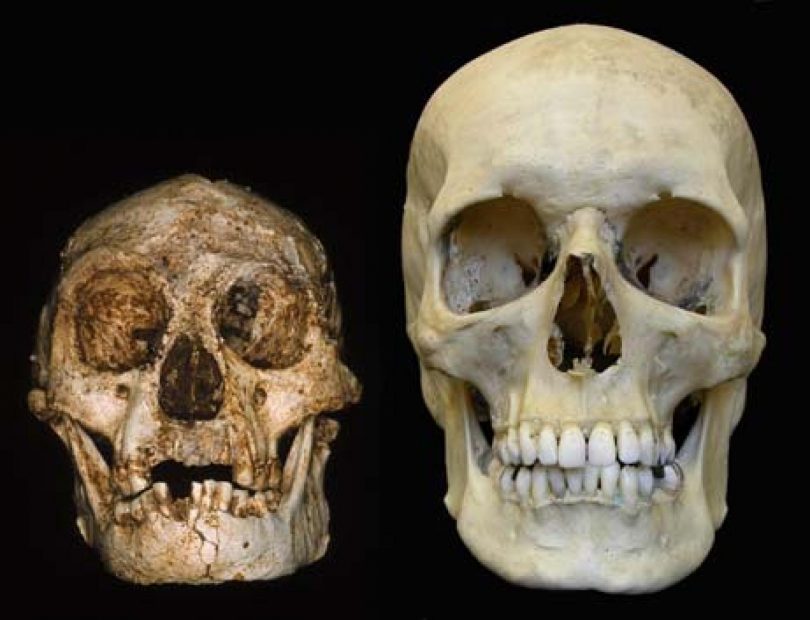 Skull size is used in human evolution to determine the intelligence and evolution of various human ‘species’. This reasoning is fallacious as illustrated by men are not more intelligent (or more evolved) than women due to having larger skull capacities. Absurd.

One of the primary tenants of human evolution is tied directly to skull size. The evolutionary conjecture claims smaller sized ‘early human’ skulls such as those found on chimpanzees (i.e. “Lucy”) continued to gain size as we moved into modern day humans because modern day humans represent the pinnacle of human evolution. Therefore, humans today have the largest skull size as to fit our really big brains because we are more intelligent and more evolved than our ancestors.  Really?

Scientific American states: “Humans are known for sporting big brains. On average, the size of primates’ brains is nearly double what is expected for mammals of the same body size. Across nearly seven million years (of human evolution), the human brain has tripled in size, with most of this growth occurring in the past two million years.”

Brain sizes: Homo erectus (likely a deformed, diseased, or nutritionally malnourished human being “hobbit like” human remains) was about 600 ml. Today, Homo sapiens are double that at 1,200 ml. Meets the evolutionary story so far…

However, there is some “evolutionary irony” that in the past 10,000 years our brains shrunk. Why? Because Neanderthals had bigger brains than modern humans.

Regarding the logic applied by human evolution that bigger brains size (skull capacity) equates to more intelligence and a more ‘evolved’ species here is a philosophical question:

Men have larger skull capacities than women therefore men are smarter than women? Also, due to this increased skull size, men are more ‘evolved’ than females? This rational is Idiocy.

However, when we apply the human evolutionary criteria of skull size as to make the determinations of intelligence and level of “evolutionary prowess” then the answer to both these question are a resounding yes! But this is clearly fake science.

Human brains vary considerably in size across adults, with males having slightly larger brains than females. It is hard to pin down what makes the human brain exceptional among mammals—neither brain size, relative brain size nor number of neurons is unique to humans.”

These concepts of brain size (skull capacity) as applied to intelligence or supposed ‘evolutionary prowess’ are fallacious. See in the chart below that larger modern human skull capacities fall into the range of approximately 1100 ml to 1600 ml (dark green) with most skulls falling between 1300 ml and 1500 ml.  The human range of 1100-1600 ml contain all the noted human skulls ranges of ALL the (supposed) human Homo ancestors: Homo erectus, Homo sapiens, Neanderthal, etc.  The smaller samples (yellow) are under 600 ml fall into modern chimpanzee and various monkey skull sizes approximately 400-600 ml.  Those in the middle can be represented by Apes, Orangutans, and other larger species such as extinct giant Gibbons monkeys falling between approximately 600-1000 ml (purple) consist of largely ape specimens.

It has been shown that fossil evidence from smaller fully human skulls have been collected within skulls collected for human evolution.  These can be explained as being possibly (a) genetically isolated, (b) nutritionally deprived, (c) dwarfism, (d) diseased, or perhaps a combination of any number of these factors.  These smaller human skulls collected are referred to as being “hobbit like”.

Additionally, small human skulls are found within in the population of living humans today particularly in humans effected with dwarfism (especially pituitary dwarfism) which causes human skull capacities to remain at only approximately 400 ml.  Smaller sized skull and brain size does not equate in any way to being any less intelligent than humans with normal range skull capacities.

“Almost all people with disproportionate dwarfism have normal intellectual capacities”.