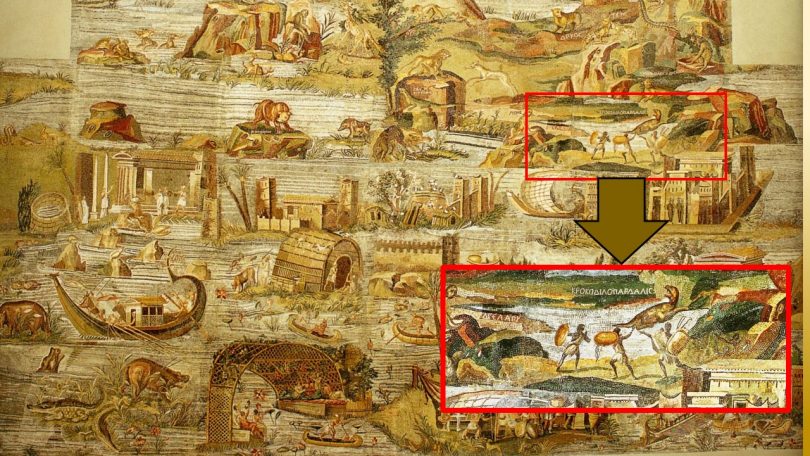 Tile artwork called “The Nile of Palestrina” from 100 B.C. depicts everyday life in a town east of Rome. The masterpiece names and depicts the hunting of animal species thought to have gone extinct more than 10,000 years earlier. By far, the most shocking are the areas of the mosaic which illustrate men hunting a dinosaur-like creature in a lake. Dinosaurs are supposed to have gone extinct at least 65 million years ago. Such depictions are quite troublesome for evolutionary timelines and assumptions. How could the artist have known what extinct dinosaurs and ice age animals looked like thousands of years before paleontology was even invented?

The Nile Mosaic of Palestrina is tile artwork considered to be a masterpiece of antiquity. It seems to depict everyday life in a town east of Rome in central Italy. Features detail depictions of Ptolemaic Greeks, black Ethiopians in hunting scenes, and various animals including animals thought as those that went extinct 10,000 years ago during the ice age. Yet each animal is not only depicted with amazing accuracy, many are named. To the right, stunningly, men are depicted hunting a dinosaur-like creature in a body of water. This Mosaic is one of the earliest Roman depiction of Nilotic scenes although several more were uncovered at Pompeii. How could these artists depict all these extinct animals before paleontology? The obvious answer is they had witnessed these animals and they were common to their experiences.

The Nile Mosaic of Palestrina