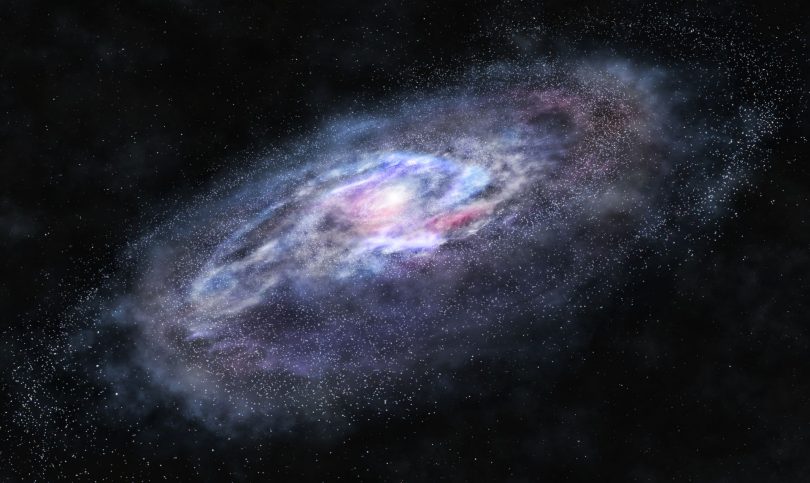 Cosmologists discuss matters of the history and origin of the universe as if it has all been settled– this is far from the truth. The Big Bang is comprised of theoretical conjectures that emerge as layers of assumptions. The so called flatness “problem” illustrates many of the weaknesses of The Big Bang Theory and its vision as to how the universe formed.

Problem #1 The universe is too orderly

Our universe has amazing homogeneity (uniformity) which is surprising for cosmologists which believe the universe was formed when The Big Bang exploded and expanded. The Big Bang would have been the most massive explosion imaginable. The “bang” would be expected to have spread out matter and energy in every directions like any other explosion. But this is not what we find– we find an orderly and flat universe. These and other variables cause cosmologists to admit that the naturalistic universe has a “flatness problem”.

Problem #2 The math requires too much precision

We are assured by evolutionary cosmologists that the Big Bang model has precisely explained the emergence and history of the universe. We are told that the math for the expansion rate right after the Big Bang had to be so incredibly accurate that it calculates down to a stunning “14 decimal places” or 10-14. 1 However, a closer review finds that the math must be that exact because if off by even one decimal place, then everything in the universe ceases to exist. Such stunning precise conditions are very problematic for cosmologists regardless of your recent internet search.

The Big Bang Theory has unraveled as examined under scrutiny such as the density of the original dot smaller than the period of this sentence is proposed as containing all the matter, energy, and mass of the universe (including dark energy and matter). This proposal has many theorists believing the Big Bang would have imploded into a black hole well before reaching anything even close to such density.

Traditional Big Bang theory posits that our universe began with a singularity- a single point of infinite density and temperature whose nature is difficult for our minds to grasp. 2

Wall, Michael of Space.com writes: “The Big Bang: What Really Happened at Our Universe’s Birth?” Oct 2011

Really? Not just difficult to grasp– impossible, defies logic, absurd, or suspension of all logic, all seem to be better explanations– the entire universe with all its energy, matter, and density in a space the size smaller than the period at the end of this sentence. Yeah- difficult to grasp for sure!

For the universe to exist as we find it today it needed to expand at rates many millions of times faster than the speed of light, this has been called the “inflation problem”. The inflation of the universe had to have happened at a rate exponentially faster than the speed of light (for The Big Bang math to “fit” the evidence). The Big Bang Theory imagines the inflation of the universe expanding by 31 billion light year diameter in a fraction of a fraction of a second (a trillionth of a trillionth of a second 2).

Why? Because the evidence of background radiation of the universe cannot be older than about 14 Billion years but the observable universe is 45 billion. Therefore such exponential expansion must have happened.

“Scientists don’t know what might have spurred inflation. That remains one of the key questions in Big Bang cosmology.”

“Inflation may seem to violate the theory of special relativity, but that’s not the case, scientists say.” 2

Cosmology operates as a forensic (or historical) field of science because the results we observe today resulted from an unobservable history. This is not a problem beyond being sure that we acknowledge the limitations of such forensic sciences. Forensic sciences are not directly testable, obviously, the Big Bang cannot be experimented on in any lab. What cosmologists can do is attempt to reconstruct how the universe we do observe today might have formed in the past theoretically. The history and formation of the universe are not comprised of a single “fact” but are mere conjecture supported by ideas. Therefore, when examining any conclusions rendered by such forensic theorists we must remain fully aware that they are opinions built on layers of assumptions, a naturalistic worldview, and perhaps mathematical formulas which are all designed to support the very theory they already presumed as true from the start.

Cosmology is not even astrophysics: all the principal assumptions in the field (of cosmology) are unverified, or verifiable in the laboratory… because the universe offers no control experiment (interpretations can have differing conclusions). Cosmologists have become comfortable with inventing unknowns to explain the unknown.”

The “flatness problem” and the “inflation problem” exist uniquely for naturalistic (evolutionary) cosmology. However, to the Creationist, an orderly, massive, and expanding universe that contains a very special planet brimming with amazing living things is fully expected. We find explanations within the biblical text of Genesis the tells us about the origin of earth, the universe, and life. By contrast, the naturalist is left having to accept that somehow (despite evidence and basic common sense) the universe must have burst into existence by random chance and without purpose. Preposterous.

1 “What is the flatness problem” Jan 2018 (video) https://www.youtube.com/watch?v=V7pWKjNWYhg