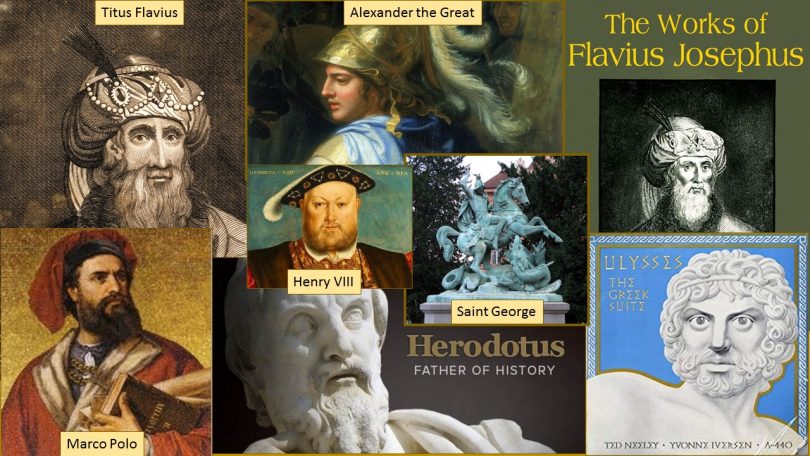 Dragons were recorded by ancient secular writers such as: Alexander the Great, Marco Polo, Josephus, Gaius Solinus, Herodotus, St George, Ulysses, Henry VIII, Flavius, St John of Damascus, and many others. These military leader’s and historians are considered as historically accurate and highly reliable. How could these highly respected ancient historian have recorded details of dragons with such accuracy thousands of years before paleontology was even imagined? Why are all their writings considered as historical fact– except the parts that contain the mythological “dragons”?

Dragons were recorded by ancient secular writers such as: Alexander the Great, Marco Polo, Josephus, Gaius Solinus, Herodotus, St George, Ulysses, Henry VIII, Flavius, St John of Damascus, and many others. These military leader’s and historians are considered as historical fact being both accurate and highly reliable. (With the only exception being the accounts of dragons which based on their naturalistic worldviews find such accounts as absurd.)  Each historian recorded varying eyewitness accounts of dragons on their journeys and military conquests. How could ancient cultures have recorded dragons with such dinosaur like accuracy thousands of years before paleontology was even imagined?

Alexander the Great: “In 330 BC, after Alexander the Great invaded India, he brought back reports of seeing a great hissing dragon living in a cave, which people were worshiping as gods. One of Alexander the Great’s lieutenants named Onesicritus stated that the Indian king Abisarus kept serpents that were 120 and 210 feet long. Subsequent Greek rulers are said to have brought dragons back alive from Ethiopia.

“When Alexander threw some parts of India into a commotion and took possession of others he encountered among many other animals a Serpent which lived in a cavern and was regarded as sacred by the Indians who paid it great and superstitious reverence. Accordingly Indians went to all lengths imploring Alexander to permit nobody to attack the Serpent; and he assented to their wish. Now as the army passed by the cavern and caused a noise, the Serpent was aware of it. (It has, you know, the sharpest hearing and the keenest sight of all animals.) And it hissed and snorted so violently that all were terrified and confounded. It was reported to measure 70 cubits although it was not visible in all its length, for it only put its head out. At any rate its eyes are said to have been the size of a large, round Macedonian shield.”

Marco Polo: “Leaving the city of Yachi, and traveling ten days in a westerly direction, you reach the province of Karazan, which is also the name of the chief city….Here are seen huge serpents, ten paces in length (about 30 feet), and ten spans (about 8 feet) girt of the body. At the fore part, near the head, they have two short legs, having three claws like those of a tiger, with eyes larger than a forepenny loaf (pane da quattro denari) and very glaring.

“The jaws are wide enough to swallow a man, the teeth are large and sharp, and their whole appearance is so formidable, that neither man, nor any kind of animal can approach them without terror. Others are met with of a smaller size, being eight, six, or 5 paces long; and the following method is used for taking them. In the day-time, by reason of great heat, they lurk in caverns, from whence, at night, they issue to seek their food, and whatever beast they meet with and can lay hold of, whether tiger, wolf, or any other, they devour;

“After which they drag themselves towards some lake, spring of water, or river, in order to drink. By their motion in this way along the shore, and their vast weight, they make a deep impression, as if a heavy beam had been drawn along the sands. Those whose employment is to hunt them observe the track by which they are most frequently accustomed to go, and fix into the ground several pieces of wood, armed with sharp iron spikes, which they cover with sand in such a manner as not to be perceptible.

“The flesh also of the animal is sold at a dear rate, being thought to have a higher flavor than other kinds of meat, and by all persons it is esteemed a delicacy.”

Another famous account of a dragon slaying is the story of Saint George and the Dragon, which was included in Jacobus de Voragine’s Legenda Aurea (or Golden Legend), a collection of Saints’ lives compiled around the year 1260 and translated into English and published by William Caxton in 1483. Cathedrals have been built in recognition of and named after St. George in Ontario, Canada (1828), Perth, Australia (1888), and London, England (1848). There are also several in the United States. These cathedrals all proudly display a painting or relic somewhere depicting the slaying of the dragon by St. George.

“The dragons of legend are strangely like actual creatures that have lived in the past. They are much like the great reptiles which inhabited the earth long before man is supposed to have appeared on earth. Dragons were generally evil and destructive. Every country had them in its mythology.” (Knox, Wilson, “Dragon,”

The article on dragons in the Encyclopedia Britannica (1949 edition) noted that dinosaurs were “astonishingly dragonlike,” even though its author assumed that those ancients who believed in dragons did so “without the slightest knowledge” of dinosaurs.