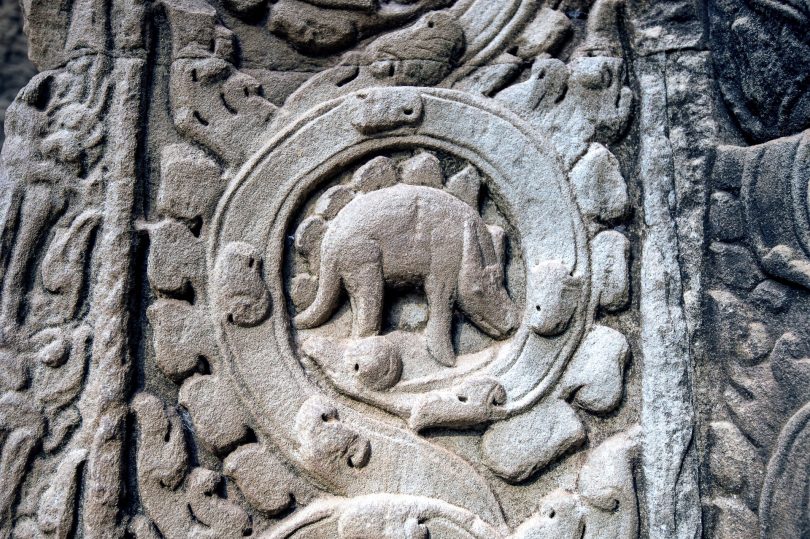 Stegosaurus stone carving found on Cambodian Temple at Ta Prohm from 1186 AD. How could these ancient Cambodian people have so accurately depicted the Stegosaurus dinosaur that went extinct a supposed 60 million years earlier, all hundreds of years before paleontology was invented?

Mainstream paleontologists say that dinosaurs went extinct 65 million years before the evolution of modern humans.  This, however, has not stopped the suggestion that some dinosaurs may have survived as relict populations and have appeared in human artwork. An example of artwork put forward as evidence for this view is a cryptic carving at Ta Prohm, a beautifully overgrown temple in Angkor, the capital city of the former Khmer Empire. “

Ta Prohm was built during the reign of the Khmer ruler, Jayavarman VII (1181-1218 AD) as a monastery for Mahayana Buddhism. After the dissolution of the Khmer Empire, the temple was abandoned and reclaimed by the forest until the 19th century, when archaeological excavations at the site of Angkor began. Ta Prohm is most famous today for the fascinating appearance of the giant tree roots which have wound their way through the loosened stones. However, that beautiful view is being carefully watched and maintained these days to ensure that the temple will not deteriorate further or become unsafe for the countless visitors who marvel at the site each year.”

By CALEB STROM;   “Is the Creature Carved Into Angkor Temple Wall a ‘Domestic’ Dinosaur?” https://www.ancient-origins.net/unexplained-phenomena/creature-carved-angkor-temple-wall-domestic-dinosaur-009546