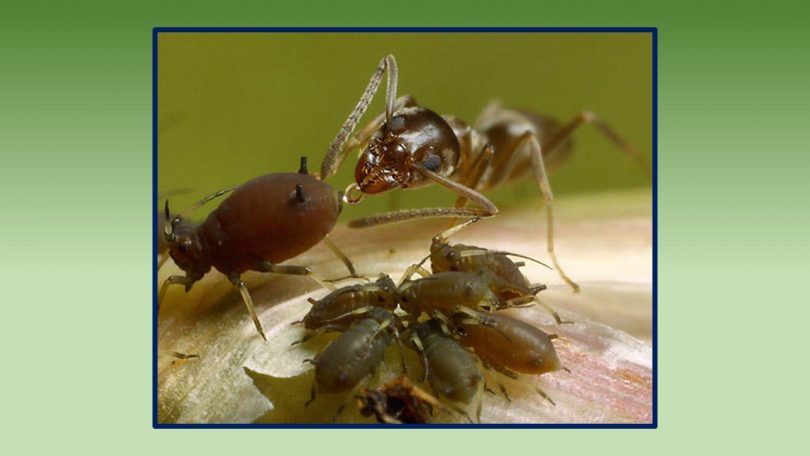 Ants farm aphids? You read that correctly! Ants provide protection and shelter for aphids and harvest sugar for food from their ‘livestock’. In a rain storm, the ants will relocate their aphids to protect them from being washed away. Chemicals on the ants’ feet subdue colonies of aphids thus keeping them corralled as a ready source of food, says new research. The study throws new light on the complex relationship between ants and the colonies of aphids whose sugary secretions the ants eat.

When scientists are asked “how”? The answer is the simple “instinct”! But of course…?

How could the categorization of an the end result of such amazing processes be summed up by “instinct”? The word is thought to describe what has occurred, how (the mechanism) it was mechanism caused, and where such complex processes emerged?

“Instinct” describes the observed end result but does not explain how such amazing abilities came about, these mechanisms are a mystery. While textbooks and classrooms consider “instinct” as the all-inclusive answer.

What: It tells us the process is due to instinct;

How: The process occurs by instinct;

Where: instinct emerged by natural selection.

Instinct cannot be the what, how, and where. Instinct is not a magic bullet. As we stated before, it is a word that categorizes an observable result: period! All other processes, descriptions of function, emergence of such phenomena and functions are but mere placeholders. Placeholders as to be determined or unknown to science.

Therefore, any supposed Mechanism and emergence of “instinct” are unknown and any proclamation to the contrary are non-scientific conjecture.