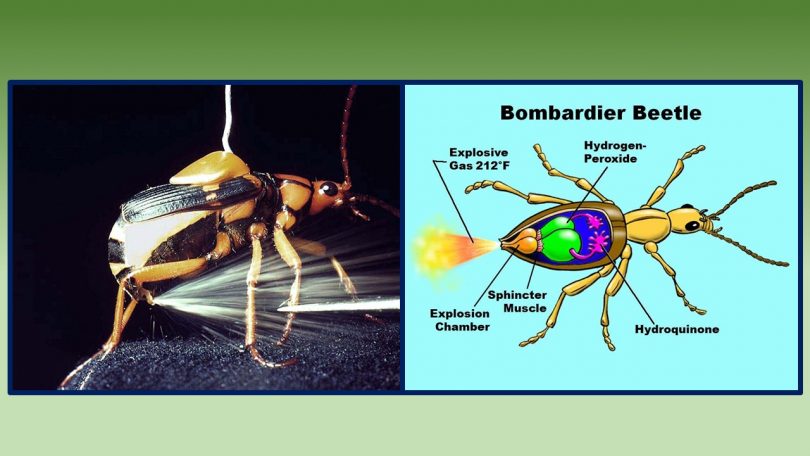 The bombardier beetle defies evolution by storing two different chemicals in separate containers in its abdomen used for chemical warfare and defense. Such chemical use illustrates irreducible complexity—where all mechanisms must be fully functioning from the start for any of it to work. The use and storage of such highly specialized chemicals raises serious questions as to how evolutionary processes could have ever provided such amazing abilities to a beetle by simple step by step changes.

When these two ingredients are combined with an additional enzyme, the beetle can spray (with amazing accuracy) a toxic chemical that reaches burning hot temperatures of 2120 F.

How could this have developed through sequential steps if inert chemicals provided no benefit during sequential evolution? Such puzzles defy evolutionary models and predictions.

A creationist, Francis Hitching described the bombardier beetle’s defense system: “The beetle squirts a mixture of hydroquinone and hydrogen peroxide into the face of the enemy.  The two chemicals, when mixed together, literally explode.”

Richard Dawkins within the Blind Watchmaker criticized this assertion.  Dawkins explains that where Hitching describes the beetle’s defense system as a “a mixture of hydroquinone and hydrogen peroxide…(which) when mixed together, literally explode.”    Dawkins points out that when he personally did the experiment and mixed together these two chemicals (as described by Hitching), with enough chemicals to represent 50 bombardier beetles, nothing happened—no explosion.

Dawkins correctly points out that an additional catalyst is required for the explosion: an enzyme not mentions by Hitching.  Therefore, Dawkins concludes victoriously, the beetle could have evolved in a Darwinian step by step method by sequentially adding inert ingredients over generations (although providing no benefit to the organism) until ultimately all three complete with all the required apparatus had randomly formed, then, and only then, the beetle could use the chemicals as a weapon.

Then Dawkins victoriously reiterates: “the two chemicals together ‘literally explode’, is quite simply, false, though it is regularly repeated throughout creationist literature.”

Dawkins explains that “the beetle’s ancestors simply pressed into different service chemicals that already happened to be around.  That is how evolution works.”

When Hitching neglected to include the enzyme catalyst in his example, then Dawkins pointing out this omission: does nothing to explain how the beetle’s defense system came about via evolution.  What Dawkins is essentially stating is evolution uses complex molecular machines and functions that are merely “already around”.  This is laughable.

Question to Richard Dawkins: “How is a stereo system made?”

Dawkins answers: “By plugging in (things ‘already around’) a receiver, amplifier, CD player, and tape deck.”

Such “answers” provide zero insight as to how the complex functioning systems of the receiver, CD player, or the speakers came about from the start.

This conclusion does not explain the arrival of the beetles defense apparatus, chemicals, or function.

Although such stories seem to be fit for evolutionary literature.”

Such descriptions evolutionary explanations are used to describe all complexity in living function including the origins and function of the human eye or the blood clotting cascade.  The most we can derive from such simplistic narratives is perhaps Darwinian evolution may have occurred.

Survey says: mountains of data but actual answers are no where to be found.