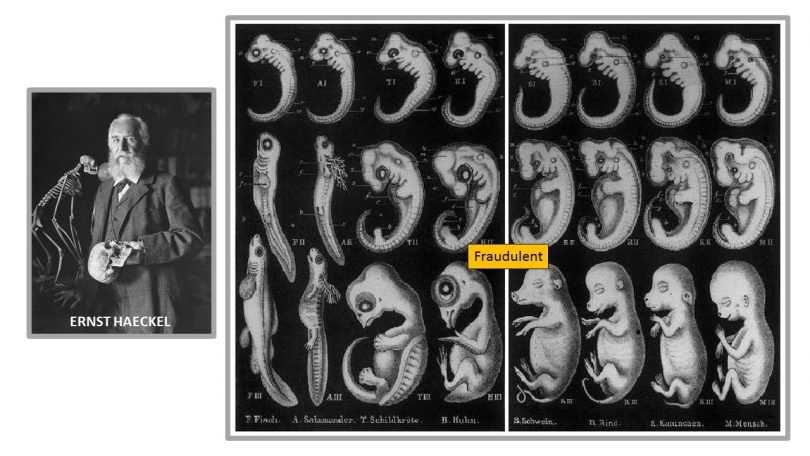 Ernst Haeckel was an avid supporter of Darwin and his naturalistic theory of evolution. In haste to further the cause along, Haeckel drew depictions of embryos with a clear deceptive slant to indicate a common ancestry. He drew embryos “transitioning” in stages from fish, to amphibian, to mammal. His drawings helped the narrative of the descent of species; However, the drawings were discovered to be massively and intentionally deceptive. Shockingly, despite such deliberate scientific fraud, Haeckel’s drawings continue to adorn biology textbooks as supporting evidence for evolution.

Faked drawings comparing a dog to a human:

Actual differences between dog and human:

This is one of the worst cases of scientific fraud. It’s shocking to find that somebody one thought was a great scientist was deliberately misleading. It makes me angry … What [Haeckel] did was to take a human embryo and copy it, pretending that the salamander and the pig and all the others looked the same at the same stage of development. They don’t … These are fakes.”

The idea was so convincing, that despite the known fraud the drawing are, the images of embryo evolution perpetuates into most biology textbooks even into modern day.

Many textbook publishers conceal the deception by illustrating the drawings while writing a mild disclaimer that such images were “misrepresentations” of actual embryo’s and perhaps show a more modern photo of an embryo. However, they going on to completely validate the very premise the fraudulent drawing illustrated!

As an example: Miller & Levine later revised their 1994 textbook and removed the drawings and added photos of embryos but wrote: “Darwin and his contemporaries knew that early embryos of many animals look nearly identical and that the earliest stages of development in “lower” animals seem to be repeated in the development of “higher” animals such as ourselves (Fig. 8.15). Darwin realized that the similar developmental paths followed by animal embryos make sense if all of us evolved long ago from common ancestors through a series of lengthy evolutionary changes...The earliest stages of the embryos life, therefore, are essentially “locked in,” whereas cells and tissues that are produced later can change more freely without harming the organism. As species with common ancestors evolve over time, divergent sets of successful evolutionary changes accumulate as development proceeds, but early embryos stick more closely to their original appearance.” Joseph S. Levine & Kenneth R. Miller, Biology: Discovering Life, pg. 162 [2nd Ed., D.C. Heath, 1994]

Miller (publisher of the textbook above) testified that at its peak usage, students in “more than 200 colleges and universities around the country” read…textbooks like this one.

Haeckel not only changed the drawings by adding, omitting, and changing features but, according to Richardson and his team:

Haeckel also fudged the scale to exaggerate similarities among species, even when there were 10-fold differences in size.”

“Haeckel further blurred differences by neglecting to name the species in most cases, as if one representative was accurate for an entire group of animals”.

An international team collaborated to compare Haeckel’s drawings to actual photographs of embryos because apparently despite the known forgery of the old drawings, no one had yet corrected the data. The team collected embryos from 39 different creatures, including marsupials from Australia, tree-frogs from Puerto Rico, snakes from France, and an alligator embryo from England. They found that the embryos of different species are very different.

In fact, they were so different that the drawings made by Haeckel (of similar-looking human, rabbit, salamander, fish, chicken, etc. embryos), the team concluded that Haeckel’s drawings could not have even been based on any real specimen.

Ernst Haeckel’s drawings were declared fraudulent by Professor His in 1874 and were included in Haeckel’s quasi confession, but according to Richardson:

“Haeckel’s confession got lost after his drawings were subsequently used in a 1901 book called ‘Darwin’ and ‘After Darwin’ and reproduced widely in English language biology texts”.

Seeing this fraud continues in “science” books through modern day, when will there now be a rush by libraries, universities, and publishers of textbooks to finally withdraw this fraudulent science from circulation for good? Or, does the fraud persist because the idea of ’embryonic similarities’ help ‘teach’ evolutionary truth? Or, is it simply without such perpetuation of academic fraud (as most icons are frauds) would eventually leave evolution without any “evidence“?

Nevertheless, the recapitulation idea (embryo similarity) is still advanced as evidence for the theory of evolution in many books and particularly encyclopedias and by popular evolutionists such as the late Carl Sagan.”