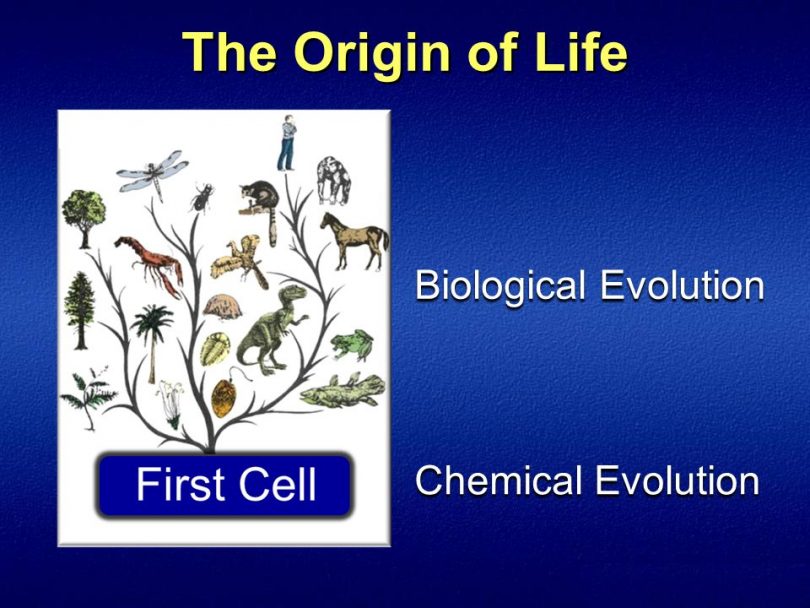 The scientific Law of biogenesis states: “life can only come from life”. Thereby, stating that as scientific fact life does not and cannot spontaneously generate despite evolution’s reliance on such events. Evolution requires the violation of this and many other scientific principles in order to somehow allow life to emerge serendipitously.

THE EVOLUTIONARY MIRACLE OF LIFE: Evolutionary conjecture claims life ‘must have’ begun in a pond (or ocean vent, or ice crystal, or bubble) as a result of the combination of chemicals reacting with a ‘primitive’ atmosphere.  Here, lightning reacted with chemicals and amino acids.   Then, via mathematical odds considered an absurdity, these processes found a way to form protein chains.  These protein chains then self-folded to help bring the proto-cell (or the other way around) into life.  Regardless, through the cascades of mathematical impossibilities ran, scientists ‘know’ that life ‘must have’ emerged via some combination of these events.  Also, life emerged complete with the capacity to replicate itself!  Then, these ancient ‘simple’ life forms, over many millions of generations, evolved into more and more complex living organisms rendering the conclusion of how molecules ultimately became man.

Keep in mind that all this ‘must have’ happened because naturalism only allows for life to emerged through purely natual processes.  Therefore, life ‘must have’ emerged through (or within) water- it surely didn’t happen on dry ground.  Then in this water were the ‘just right’ combinations of chemicals and energy combined and created amino acids (or collect them from meteors, comets, or even aliens), then self-assembled the first protein chain on earth.  This first occurrence ‘must have’ happened approximately 3.8 billion years ago as to allow sufficient time for evolution to occur.

Compound these events with yet another massive challenge found in DNA function.  All life has DNA– no exceptions.  Therefore, even the supposed ‘ancient’ bacteriums of billions of years ago contained DNA. Simply put, there is no explanation for the arrival of DNA as information, as code, as the blueprints for protein synthesis.

While there is much speculation about how life arose, what does actual scientific observation and experimentation reveal? The answer: we have never, no not once, observed anything like a ‘primordial soup’, nor any life arising spontaneously through chemical and naturalistic processes. Life only comes from life.

For evolution to offer an explanation for the origin of life, the known scientific physical law of biogenesis must be violated. The law of biogenesis states that “life can only generate from life”(1) yet, evolutionist imagine that somehow chemicals must have emerged into living organisms in a “warm little pond” for life to have first begun.(2)

Over 170 years ago, during the mid-1800’s, light years ago on the time scale of scientific advancement, the idea of the spontaneous generation of life was still widely accepted as the mechanism for the origin of life. Among these historically important scientists that believed at least some aspects to this model included: Jean Lamarck, Alfred Wallace, Thomas Huxley, and of course Charles Darwin. Darwin wrote his book ‘The Origin of Species’(3) which is still hailed to this day as the basis for the Theory of Evolution. In defense of these scientists, we must note that these ideas persisted before the discovery of microbes, the understanding of germs, the understanding of the complexity of the living cell, or DNA.

When these scientists of the nineteenth century (or earlier) witnessed a decaying animal on the side of the road, life did seem to emerge in the form of maggots and flies. These life forms seemed to have emerged from thin air. Scientists of this time thought the living cell as simple. They imagined these cells as ‘blobs’ of ‘protoplasm’. Compare this as a contrast to what we understand about the complexity of the living cell today, these ‘blobs’ of the 1800’s would be a ‘universe’ in the twenty first century.

It was Louis Pasteur’s experiments in the 1840’s(4) that confirmed spontaneous generation of biological organisms did not occur. He found that by sanitizing bottles and containers unwanted growths such as molds or germs could be controlled. If you have heard of ‘pasteurized milk’ it comes from this scientific determination of Louis Pasteur. In other words, living things are the only way other living things can come into existence and life forms such as germs (or literally any living organism) do not spontaneously emerge.

Today, scientists know that the spontaneous emergence of life does not happen, not ever. Yet, for over 170 years this evolutionary idea of the spontaneous arrival of life persists. Why would scientists continue to push forward a known false scientific principle? Simply put: without this narrative, evolution has no explanation for the origin of life. Therefore, to preserve the ideals of evolution, we are still indoctrinated with the “primordial-soup-emergence-of-life” nonsense. To make it even worse, we are taught this in science class!

In summary, evolution must have the original biological organisms of earth arriving from spontaneous generation of non-living chemicals.(5) This must have occurred in the past as to explain the arrival of all living organisms on earth today. This is held as a scientific explanation despite the fact that this so called ‘science’ violates the very science it presupposes to explain. A revealing perspective on the dilemma of science violating known scientific laws.

Take some matter, heat while stirring and wait. That is the modern version of Genesis.  The ‘fundamental’ forces of gravity, electromagnetism and the strong and weak nuclear forces are presumed to have done the rest….But how much of this neat tale is firmly established, and how much remains hopeful speculation? In truth, the mechanism of almost every major step, from chemical precursors up to the first recognizable cells, is the subject of either controversy or complete bewilderment.”(6) (emphasis mine)

Chemist and author Andrew Scott stated in a New Scientist