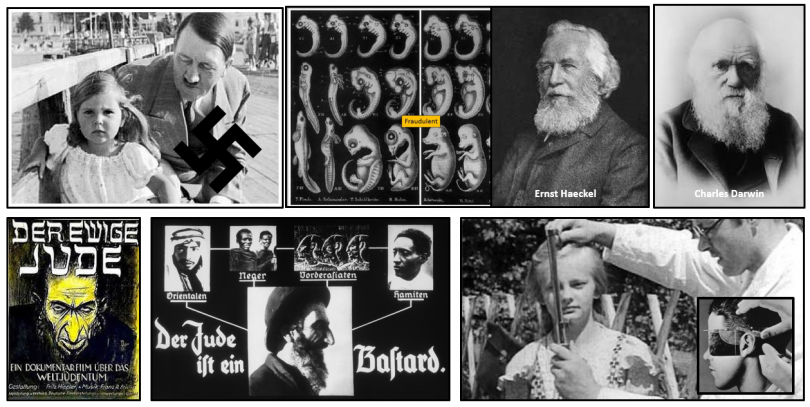 Hideously, Darwinian evolutionary principles such as the “survival of the fittest” provided justification for mass murder of millions of innocent people. Murder carried out by Nazi Germany and other evil empires against “biological threats” of humanity. While it may be difficult to discover, Hitler used evolutionary constructs of superior and more highly “evolved races” to justify racial cleansing. The rationale was “compromised” genetics of the mentally ill and “inferior” races threatened all of humanity and therefore must be eliminated.

Evolution and the concepts of the Darwinian principle summed up as the “survival of the fittest” was used radically by Hitler and other evil empires as justification for vicious racism and so called “racial cleansing” as justification as to wipe out “biological threats” to humanity.

The United States Holocaust Memorial Museums website states: “From 1933 to 1945, Nazi Germany carried out a campaign to “cleanse” German society of individuals viewed as biological threats to the nation’s “health.” Enlisting the help of physicians and medically trained geneticists, psychiatrists, and anthropologists, the Nazis developed racial health policies that began with the mass sterilization of “genetically diseased” persons and ended with the near annihilation of European Jewry…”

“As a result, a central policy of Hitler’s administration was the development and implementation of policies designed to protect the ‘superior race’. This required at the very least preventing the ‘inferior races’ from mixing with those judged superior, in order to reduce contamination of the latter’s gene pool. The ‘superior race’ belief was based on the theory of group inequality within each species, a major presumption and requirement of Darwin’s original ‘survival of the fittest’ theory.”

“This campaign was based in part on ideas about public health and genetic “fitness” that had grown out of the inclination of many late nineteenth century scientists and intellectuals to apply the Darwinian concepts of evolution to the problems of human society.”

“Leading Nazis, and early twentieth century influential German biologists, revealed in their writings that Darwin’s theory and publications had a major influence upon Nazi race policies. Hitler believed that the human gene pool could be improved by using selective breeding similar to how farmers breed superior cattle strains. In the formulation of their racial policies, Hitler’s government relied heavily upon Darwinism, especially the elaborations by Spencer and Haeckel.”

This philosophy culminated in the ‘final solution’, the extermination of approximately six million Jews and four million other people who belonged to what German scientists judged as ‘inferior races’.”