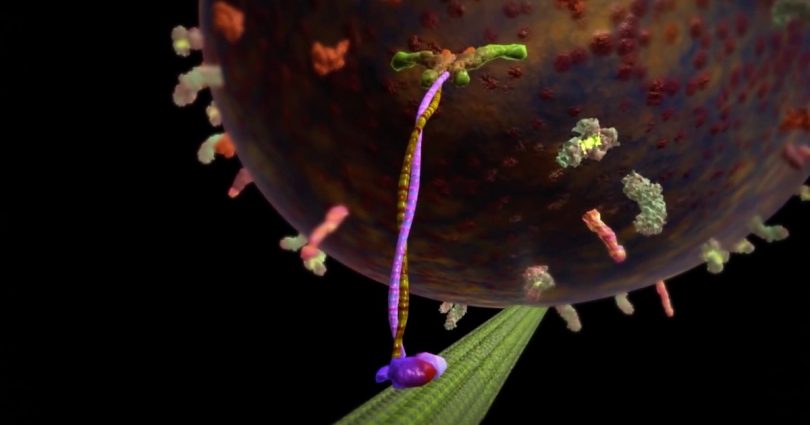 Kinesin is awe inspiring because a molecular stick figure places massive payloads on its shoulders and then walks it down the molecular roadway to its destination in the cell. Such wonders of life are hallmarks of design.

Molecular machines provide compelling evidence for intelligent design because there are no other plausible causes, such as spontaneous random chance or the injection of time, regardless of how many billion years one throws at it, which can explain nano-precise machine-like structures with multiple interdependent interacting parts.

In a well-known 1998 article in the journal Cell, former president of the U.S. National Academy of Sciences Bruce Alberts explained the astounding nature of molecular machines:

[T]he entire cell can be viewed as a factory that contains an elaborate network of interlocking assembly lines, each of which is composed of a set of large protein machines.… Why do we call the large protein assemblies that underlie cell function protein machines? Precisely because, like machines invented by humans to deal efficiently with the macroscopic world, these protein assemblies contain highly coordinated moving parts.”

Irreducible Complexity is disputed by Darwinian’s by the explanation of what they call a “Co-option“. Meaning: “To take biological parts to be borrowed and used for another purpose.”

This co-option “save” has glaring problems because evolutionary biology believes life and its complexity is transformed by time plus the invisible hand of evolution. A “hand” which is blind, purposeless, and unguided yet it accomplishes biological function of staggering nano-scale complexity.

But there are big problems for co-option.

First, not all parts for irreducible complex “parts” are available elsewhere in nature as many components are unique to its structure and found only to its unique structure.

As an example: “most flagellar parts in bacterial flagellum are found only in flagella and no where else in nature”.1

Second, machine parts are not necessarily easy to interchange. Grocery carts and motorcycles both have wheels, but one could not be borrowed from the other without significant modification. At nano scales were molecular ratios of function and size must match up, this problem becomes even more troublesome.

As an example: “At the molecular level, where small changes (can cause massive problems such as) prevent(ing) two proteins from interacting, (makes) this problem severe.1

Third, complex structures almost always require a specific order of assembly. When building a house, a foundation must be laid before walls can be added, windows can’t be installed until there are walls, and a roof can’t be added until the frame complete. Assembly must be completed in a specified order, to our understanding this can only occur by the informational blue prints and digital code retained in the cell (DNA).

As another example: “one could shake a box of computer parts for thousands of years, but a functional computer would never form“.1