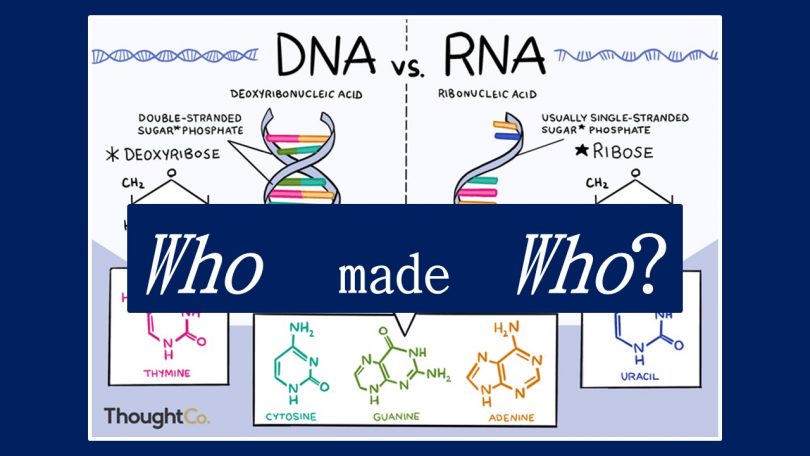 The famed RNA World Hypothesis (which was proposed as a theory as to how life emerged from purely chemical processes) has been found to be dead on arrival. Chemistry has determined that the nucleotides which comprise the RNA structures are built by many components and through various specific and precise processes which are chemically incompatible making the theory a “prebiotic chemists’ nightmare”.

Thomas Cech in the 1980’s found RNA had some modest catalytic abilities.  Therefore, those seeking answers to the origin of life reasoned that perhaps RNA could act as a template for life. RNA could potentially catalyze its own replication. Therefore, science eagerly embraced the idea called The RNA World Hypothesis which proposes that life arose not from proteins as earlier proposed, but by the catalytic properties of RNA.  The problem that arose was the components could be synthesized (through highly specialized processes) in the lab but during undirected natural reactions the process was chemically incompatible or simply: would never occur and RNA was a prebiotic chemists’ nightmare.1

“While a chemist can make nucleotides in a laboratory by synthesizing the components separately, purifying them, and then recombining the components to react to each other… during undirected chemical reactions overwhelmingly produce undesirable products and shapeless goop in the bottom of test tubes.”

Research has caused Gerald Joyce and Leslie Orgel, two scientists who have worked long and hard on the origin of life “problem”, declare “RNA is the prebiotic chemist’s nightmare.”

Further explaining the RNA World Hypothesis problems Joyce and Orgel conclude: “Scientists interested in the origins of life seem to divide neatly into two classes.  The first, usually …molecular biologists, believe that RNA must have been the first replicating molecule and chemists are exaggerating the difficulties of nucleotide synthesis.  The second group of scientists are much more pessimistic.  They believe that the (origin) of nucleotides on primitive earth would have been a near miracle.”

Many, many, additional problems and paradoxical relationships plague the RNA World Hypothesis. Here are a few massive ones: (1) Today, DNA information builds RNA– not the other way around, how did the maker of DNA instruct it to build RNA? (2) Both DNA and RNA contain protein structures– only DNA carries the information to assemble protein chains, where did RNA get proteins? (3) Proteins work in teams to perform functions which do not function apart from one another, so which protein was made first? (4) Protein formation can only occur by chaining together amino acids which are found (aside from human synthesizing in the lab) as only being produced within plants and animals– so where did the amino acids come from? (5) Protein chains can only form under the controls of enzymes, where did the enzymes come from? (6) No functions could occur outside a protective membrane (water and oxygen) are deadly toward molecular function, so where did the first cellular membrane come from? (7) Even if RNA miraculously began replicating itself, how did DNA informational code emerge from purely naturalistic processes as found in all living things today because such an event by definition would be paradoxical. The list goes on and on…