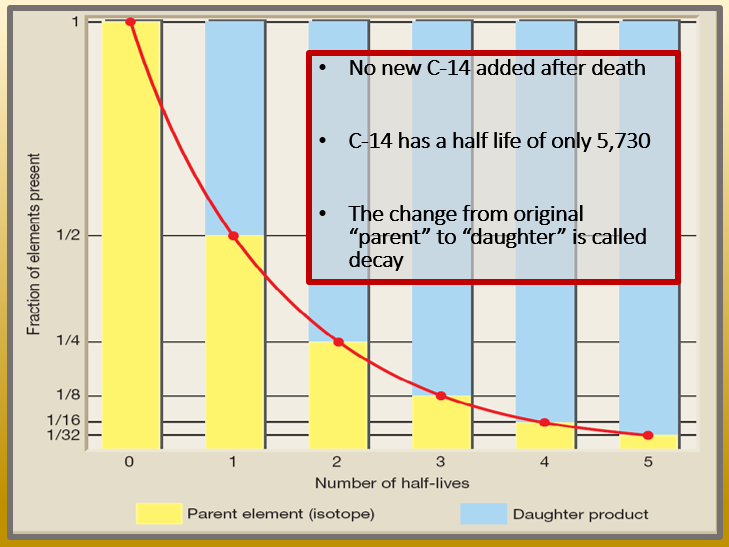 Carbon-14 has a half-life of only 5,730 years so why is it found in dinosaur fossils, coal, petroleum, and even diamonds? Scientific evidence contradicts expectations of evolutionary timelines of millions of years.

Carbon-14 (or radiocarbon) is a radioactive form of carbon that scientists use to date fossils. But it decays so quickly—with a half-life of only 5,730 years—that none is expected to remain in fossils after only a few hundred thousand years. Yet carbon-14 has been detected in “ancient” fossils—supposedly up to hundreds of millions of years old—ever since the earliest days of radiocarbon dating.”

“Even if every atom in the whole earth were carbon-14, they would decay so quickly that no carbon-14 would be left on earth after only 1 million years.  Contrary to expectations, between 1984 and 1998 alone, the scientific literature reported carbon-14 in 70 samples that came from fossils, coal, oil, natural gas, and marble representing the fossil-bearing portion of the geologic record, supposedly spanning more than 500 million years.”

“Even (these dates are much) too old when you realize that these ages assume that the earth’s magnetic field has always been constant. (However,) it was stronger in the past, protecting the atmosphere from solar radiation and reducing the radiocarbon production.  As a result, past creatures had much less radiocarbon in their bodies, and their deaths occurred much more recently than reported!”