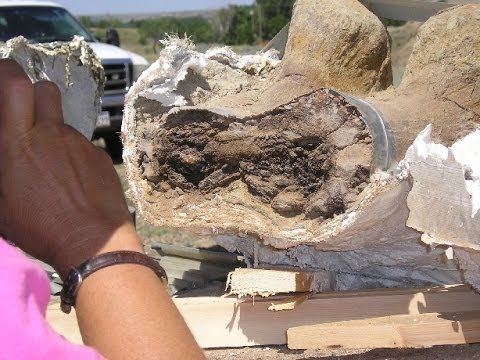 Carbon-14 dating methods conclude that radiometric substances become undetectable after about 50,000 years rendering the method useless for supposed ancient materials. The method has many assumptions and problems, but the presence of Carbon-14 in anything assumed as being over 100,000 years old is scientifically impossible. Yet dinosaur fossils consistently contain an abundance of Carbon-14…

Archaeologists and paleontologists do not use carbon-14 dating methods when determining ages on samples such as dinosaur bones, supposed human missing links, fossils, etc. For such samples they use a method of dating called “relative dating” (1). Logically, the chronological age of the rock layers assume the lower layers are older than the ones above. The rock layers the fossils are discovered in are called “strata”. Many specific fossils found within the strata are called “index fossils”. Geologists will use index fossils within the strata to age the rock layers. Inversely, paleontologists will use the rock layers to date the fossils. Together this emerges into a logical fallacy of circular reasoning. Fossils date strata, and strata dates fossils. (1)

Carbon dating is based on the decay of an atom Carbon 14, a radioactive isotope of the carbon atom with a known half-life of approximately 5,730 years. A half-life means that half of the original Carbon 14 in any given sample will decay away in about 5,730 years. In layman’s terms this means unstable elements of the Parent element “decay” (meaning the atom emits radiation by spinning off a neutron), thus forming into the daughter element of Nitrogen-14. The new daughter element is stable. Every half-life 50% more of the Parent decays into the Daughter.

The measurement of organic samples can be used to estimate the age of samples assumed as being thousands of years but never used on anything presumed as more than 50,000 years old. Why? Because scientists assume most of the Carbon-14 is decayed and therefore beyond this point the measurements get very inaccurate.

Scientists do not debate the presence of Carbon-14 in dinosaur bones, dinosaur collagen, soft tissues, or red blood cells, or any fossil. They do not debate this because they refuse to conduct the test, claiming such test are invalid due to contamination because the samples are much too old to contain Carbon-14.

The argument presented by scientists that disbelieve results of Carbon-14 in dinosaur fossils are that the samples are contaminated. This argument persists in any arena where the expected dates fall outside the presumed ages of sample data. The use of Carbon-14 dating for any organic sample risks contamination and scientists know well how to mitigate such contamination. For samples they expect younger ages such steps to prevent contamination are acceptable but for dinosaur fossils or fossils from supposed human ancestors (even if the bones are not fossilized— still bone) they refuse to conduct this test.

Despite these self imposed “rules” by the scientific community at large, Scientists within creation organization have successfully provided indisputable proof that Carbon-14 exists in fossils, including dinosaur fossils. Therefore, Carbon-14 dating, in light of a half-life of only 5,730 years, cannot be present in anything more than thousands of years old, yet, it is found in dinosaur bones and fossils. (2) The presence of Carbon-14 in these samples stand in defiance of supposed evolutionary time scales where dinosaurs lived over 68 million years ago.

The existence of Carbon-14 in dinosaur fossils, tested under the most pristine conditions to eliminate the risk of contamination, scientifically indicates these fossils are thousands of years old and cannot be even 100,000 years old. (3)