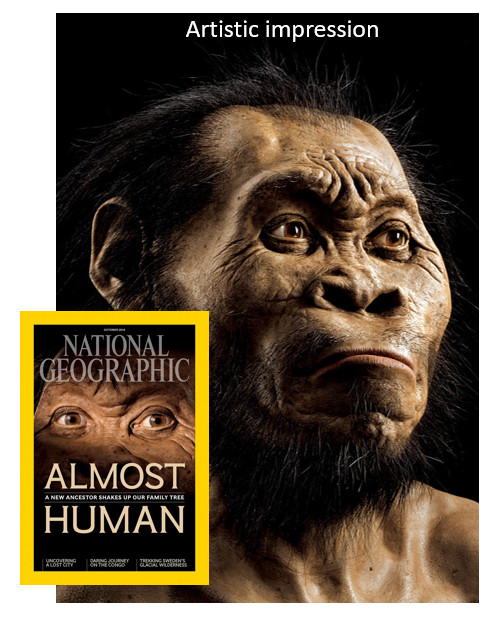 Lead paleontologist on the Homo naledi (ape) discovery Professor Lee Berger continues to refuse to carbon date his find despite the glaring reality that of the more than 1,500 samples, all are non-permineralized (not fossilized). In other words, they’re bones! Regardless of the many different excuses offered, such refusal clearly reveals Berger’s overwhelming bias and deception. Berger realizes that to keep his find as a supposed “pre-human” ancestor the samples must be millions of years old, therefore, he cannot allow scientific dating methods to be used—only assumptions. This assures future funding and fame; While helping also to fill in the gaps for the ever expanding tale of human evolution.

Professor & Paleontologist Lee Berger refuses to carbon date the bones. Bones which were not buried in sediments, laying on the surface of a cave, and unfossilized (they were bones– not fossils).

Excuse: “I don’t feel it (to be) ethical to destroy hominin (supposed human) material; dating the specimen would mean the destruction of the material.”

“…Lee Berger has of yet made no attempt (despite the criticism from evolutionary collages) to have the bones {“fossils”} carbon dated. Based on his own presuppositions about what kind of hominins (the fossils represented); Carbon dating, if it demonstrated the presence of carbon-14 in these fossils, would rule out a millions-of-years age.”

Fossils, although not permineralized, have been classified under the same genus Australopithecus.  One will have to wait and see whether the evolutionary scientific community come down on the side of the remains being Homo (human), or just Australopithecus (extinct ape).  But why label the remains Homo naledi if there is so much indication that these may have been ordinary humans with some unique anatomical variations.

The main data points of Homo naledi is these animals were “small-brained” (compared to humans) and had a skeletal shape similar to apes. However, Berger pointed out that the fossils had “human-like” hands and feet despite the fact they do not. The hands have long curved fingers tailored for climbing.

While, in our opinion, it is a stretch to compare chimp sized remains to human beings, overall it can be noted that the fossils are those of a unique monkey or ape species.

“It doesn’t look a lot like us.” Lee Berger told New Scientist

It is easy to see that finding a new human “missing link” brings fame, funding, National Geographic articles, news stories, and scientific notoriety. The call to find new evidence (splitters) of potential human “ancestors” is the drive behind the entire project. Therefore, paleo-experts warn other scientists to not be quick to call every find “a new species of human evolution”. But they do!

New species should not be created willy-nilly. In order to claim a new species one has to demonstrate that it’s different from anything that’s ever been known.”

Scientists such as Wolpoff as far back as 2001 argued that these should really all be included under Homo sapiens (human beings). The physical evidence seems to clearly lean today to the fact that these are extinct ape or monkey bones.