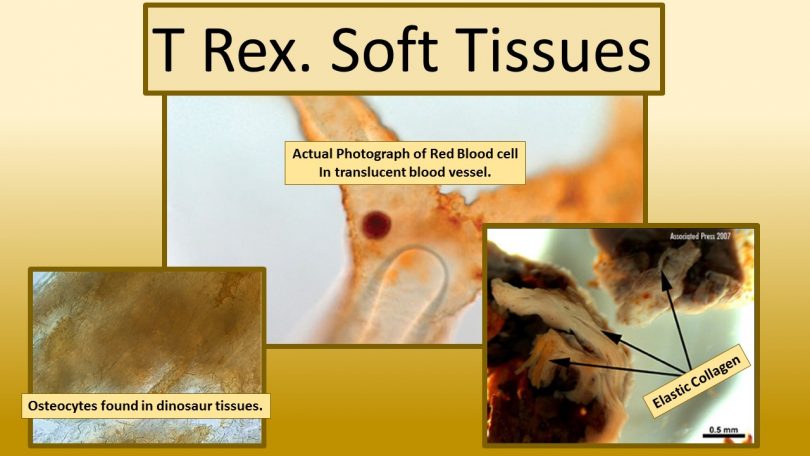 Despite new and compelling scientific revelations, such as the discovery of soft tissues and red blood cells in fossils thought to being millions of years old, paleontologists continue to refusals to use carbon dating. Carbon dating on is good on samples thousands of years old so it would certainly be useless on anything thought to being more than about 50,000 years old. However, considering the newest discoveries of soft tissues, their refusal reveals more about their bias then any actual desire to allow the evidence to lead the investigation.

Since fossil fuels are millions of years old, they no longer contain any measurable amount of Carbon-14.

Evolutionists refuse to carbon date fossils even when found with soft tissues such as red blood cells or non-fossilized bones. Why?

Because carbon dating has a half life of only 5730 years any sample assumed to being over 50,000 years old would not register and carbon and therefore it would be useless. The presence of Carbon-14 in any sample would indicate an age of only thousands of years old and not the millions of years needed by the evolutionary timelines, so this method is not used on dinosaur fossils or “early” human fossils even when the bones are non-fossilized (in other words the “fossils” are really still bone).

As an example, Lee Berger from the University of the Witwatersrand in Johannesburg and his colleagues made an extraordinary discovery. Deep inside a South African cave system they found thousands of bones belonging to a supposed “brand new species” of early humans. Immediately, other scientists wanted Berger to carbon date some of the specimens but he refused. By 2015, it become clear that Homo naledi was unlike anything discovered before. Some elements had similarity to modern human anatomy while other elements were more like that of a chimpanzee.(1)

But Berger and his colleagues had trouble establishing how old the H. naledi fossils were. Without that piece of information, most other researchers agreed that the true significance of Homo naledi for understanding human evolution was unclear. Guesses varied from as old as 2 million years to as young as 100,000 years. But no carbon dating would happen.(1)

So how did Lee Berger (the lead scientist in the discovery of Homo naledi bones– non-fossilized) and his colleagues work out the age of the fossils?

The refusal of scientists such as Lee Berger with Homo naledi bones or Jack Horner with North Carolina University and soft tissues in a T-Rex reveals a clear bias and perhaps a fear based on a preexisting worldview regarding the fossils. For Lee Berger his refusal is understanding considering his future funding is based on finding “early” human “missing links”. A carbon date might very well squash these aspirations of perhaps two million year old fossils.

The paleontologists assume the dinosaur fossils are much too old to Carbon date so they refuse despite mountains of data contrary to this position.

The point here is: Wouldn’t a non-biased and curious scientist want to unveil all the stories his data might reveal? The answer is no– there is no dissent allowed in naturalism!

Fortunately for the scientific world we have Mary Schweitzer who has broken these rules. While she subscribes to evolution and the millions of years time frame associated with it, she does the research. Her discoveries have been shocking to the field of paleontology and evolution.

Schweitzer, one of the first scientists to use the tools of modern cell biology to study dinosaurs, has upended the conventional wisdom by showing that some rock-hard fossils tens of millions of years old may have remnants of soft tissues hidden away in their interiors.”

“The reason it hasn’t been discovered before is no right-thinking paleontologist would do what Mary did with her specimens. We don’t go to all this effort to dig this stuff out of the ground to then destroy it in acid,” says dinosaur paleontologist Thomas Holtz Jr., of the University of Maryland. “It’s great science.”