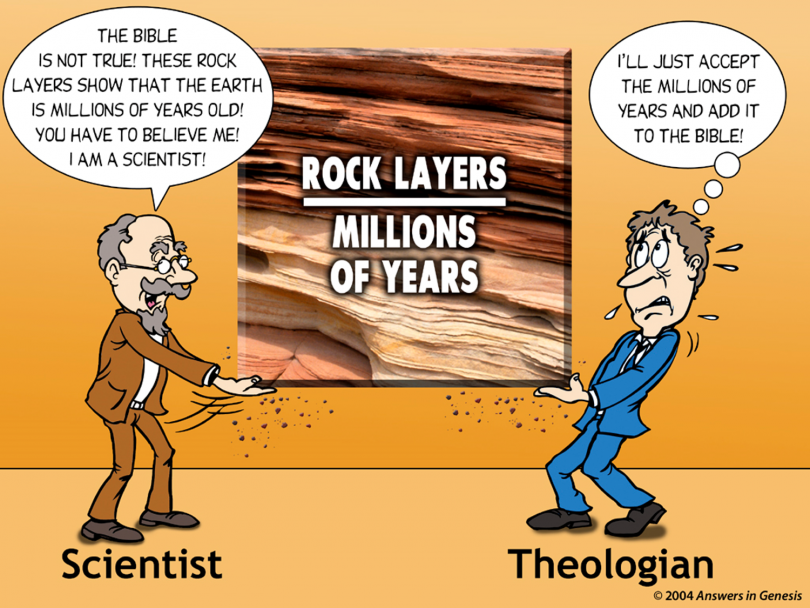 Scientific evidence does not differ between the camps of creationism and Darwinism but worldviews do. Worldviews establish a belief in the world, a lens, which we view how the evidence came to be as we found it today. Such worldviews cause the evidence to amount to different conclusions based on such worldviews.

Regarding scientific inquiry, Scientists and Creationists do not use different bodies of evidence, both rely on the same fossils, rock layers, geological formations, oceans, radiometric dating, universe, etc.  The differences of conclusions are not based on physical evidence but in how the data is interpreted based on differing worldviews.  Although there is debate among various fields of science regarding specifics, the worldview of naturalism (evolution) assumes the physical evidence of everything in the universe ultimately occurred through naturalistic processes specifically without any supernatural influence.  Foundationally, this worldview only can persist within a very ancient universe (billions of years old) where time itself could form and transform all we observe today.   Although Christians scholars debate various interpretations of scriptures all the time, the Christian worldview begins with the belief that the bible is true and therefore reliable. Therefore, conclusions are drawn within such a framework as perhaps resulting from biblical events such as creation or the global flood.

A good example of how the same evidence can draw different conclusions based on varying worldviews is the Grand Canyon. The Grand Canyon reveals evidence of massive canyons apparently formed by erosion. This observation is undisputed.

However, when Naturalistic worldviews are applied which presumes an ancient earth and millions of years of antiquity. Meanwhile, the Creationist worldview presumes a much shorter time line and therefore perhaps such structures formed quite rapidly. In reality, neither side witnessed the formation of the Grand Canyon but are using their particular worldviews to both reconstruct and draw conclusion as to what the physical evidence reveals.

Both sides drew their conclusions based not on physical evidence but rather, based on preexisting beliefs based on their respective worldview.

To the Naturalist, the various rock layers of the canyon were laid down over eons of time, millions and millions of years. Later, these layers were eroded away primarily by the Colorado River again over millions of years.

Therefore, the Naturalist concludes (based on their worldview) that the Grand Canyon is an ancient formation that was formed over hundreds of millions of years. They reason further from this conclusion that the same slow and gradual erosion observed today in the present also fully demonstrates the rate of erosion for all time.

In contract, to the Creationist, especially in light of the recent events observed at Mount Saint Helen’s, perhaps The Grand Canyon may have formed very rapidly during catastrophic conditions. At Mount Saint Helen’s scientists observed over twenty-five feet of rock layers being formed in a single afternoon, therefore scientists observed massive rock layers were laid down very quickly during a volcanic catastrophe. As for erosion, again at Mount Saint Helen’s, scientists observed rapid erosion where solid rock was cut into a massive canyon over a few years. This same canyon was later nicknamed “The Little Grand Canyon” although much smaller in size compared to The Grand Canyon, the similarity in appearance. Additionally, megasequence rock layers are evidence of water sorting of materials which would be expected in a massive flood. Therefore, a Creationist might further reason that perhaps a water runoff (such as receding water of a global flood or lakes water runoffs such as seen at Niagara Falls) suddenly broke and caused a massive water runoff which cut these canyons perhaps over a few days, weeks, or months.